Pal around with us and Rebekah Kochan

We’d be lying if we say that the cute one liners of a lead actress made Project Q Atlanta choose “Eating Out 3: All You Can Eat” to sponsor at Out on Film. We admit, the preponderance of studs won us over first.

But that doesn’t diminish the contribution of Rebekah Kochan (photo) to Project Q Night on Saturday at 10 p.m. As the only cast member to star in all three of the “Eating Out” series, she’s part of why the movies are so popular.

“My character, Tiffani, is much sluttier than I am,” the actress demures. “But I’m just as fun to hang out with!”

It’s true. The actress is fiercely cute, has sharp wit and natural comic timing. You’ll get to see for yourself at Saturday’s screening. Kochan joins us with the film’s director, Glenn Gaylord, for a Q&A and a bar hop after the show.

“Rebekah is an absolute hoot,” says Jim Farmer, Out on Film’s festival director. 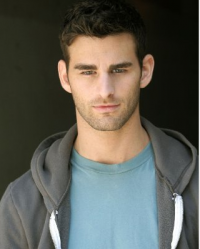 The ProjectQAtlanta.com team will be there with giveaways including tickets to the Pride Kickoff Party featuring DJ Martin Fry, a $50 gift certificate to Las Margaritas, coffee table-worthy books on queer cinema courtesy Brushstrokes, tickets to “Grey Gardens” at Actor’s Express, and anytime passes to the Georgia Aquarium.

And did we mention the studs? Well, they’re worth mentioning again. Besides the ones we expect to be in the audience, the “Eating Out” series always wrangles some up-and-coming, super-hot actors to seduce each other in the lead roles.

Kochan plays the witty, wacky gal pal with all the best intentions — and often, the best lines — for the sexy gay guys in the series. Saturday’s movie will keep your attention with eye candy galore, including Chris Salvatore (bottom photo) in various stages of undress and highly charged sexual situations.

He’s in good company. The first “Eating Out” was the 2004 sleeper hit starring Ryan Carnes, who went on to play gay as a recurring character on “Desperate Housewives.” “Eating Out 2: Sloppy Seconds” in 2006 set tongues wagging at the likes of Marco Dapper.

Saturday’s Out on Film screening is the first time that the final edit of “Eating Out 3” will be seen by the public. Only rough drafts were available at a few earlier film festivals this year.

Wet your whistle with this clip from the movie, then be sure to join us tonight at 10 p.m.: