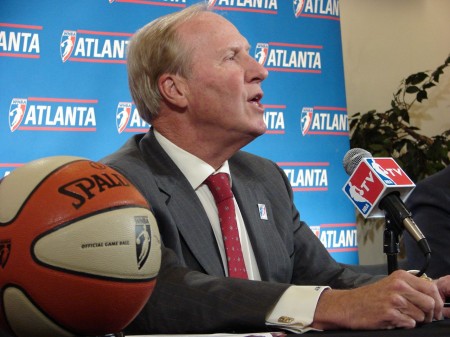 Despite strong signs that they are competitive in only their second year, the Atlanta Dream‘s sole owner says he wants a divorce. Maybe dub it a trial separation.

The Dream, on a three-game win streak that has lifted them to a 10-10 record, prepares for their road game in San Antonio on Thursday with this bit of news: Ron Terwilliger wants the team to see other people. He informed the WNBA on Tuesday that he longer wishes to be the only set of deep pockets owning the young franchise.

Terwilliger intends to remain an investor in the franchise, according to Bob Hope, who is part of an informal group from Atlanta charged with finding a new lead owner.

“His heart was in the right place, but life changed on him,” Hope said.

A.J. Robinson, president of Central Atlanta Progress, a downtown business group, also is part of the group searching for a new owner. Hope and Robinson were part of the original 12-person group that aggressively pursued a WNBA team for the city. Last season the Dream made their debut and finished a league-worst 4-30, but they currently are 10-10 this season.

There’s no explanation yet from Terwilliger or reaction from other team executives, so we’ll hold off on drudging up Terwilliger’s quotes when he bought the team about sticking around long enough to make it a winner. OK, just a little: Before their inaugural season in 2008, Terwilliger said he wanted a winning record by the third season and a championship contender by the fifth or sixth. He wasn’t clear then that he set those goals whether he stuck around or not for the heavy lifting needed to meet them.

Or the time Terwilliger talked about how the Dream captures the ethos of the city. Nah, we’ll pass on throwing those back in his face.

Terwilliger made his fortune in real estate development. With the recession and real estate crash, apparently he’s thinking twice about the $10 million he sunk into buying the team.