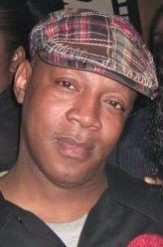 An owner of the popular black gay club Traxx Atlanta was shot and killed early Wednesday on a street in southwest Atlanta, according to police and media reports. Durand Robinson (photo) of Decatur was found lying in the middle of Hadlock Street with a gunshot wound to his chest about 1 a.m. Wednesday. Media reports says Robinson is 50; his Facebook page indicates he is 41. Family and friends told WSB that Robinson may have been the victim of an attempted carjacking, but Atlanta police say investigators have not determined a motive or named a suspect in the shooting Robinson’s death comes a week before Black Gay Pride, the popular annual event over Labor Day Weekend that draws thousands of people to the city for scores of events. Traxx is sponsoring several official events with In the Life Atlanta, which organizes Black Gay Pride, along with other parties at various clubs including Traxx on Columbia Drive in Decatur. In the Life Atlanta announced Wednesday that the organization will pay tribute to Robinson during Black Gay Pride’s opening Candlelight Vigil on Sept. 1 at First MCC of Atlanta.

The Board of Directors & Volunteers of In The Life Atlanta, mourn the death of Durand Robinson of Traxx Atlanta. His light will be missed, but his spirit and the shared memories will live on in our hearts and the hearts of his family, friends, loved ones and those in the community who knew him. ITLA will light a special candle in tribute to Durand Robinson during our Candlelight Vigil on Wednesday, Sept. 1, 2010. We offer our sincere condolences to the Traxx Atlanta family.

Robinson's business partner, Philip Boone, told WSB that his death is a tragedy.

"This was devastating for our community and the Traxx family. He was an angel ... we will miss him," said Boone.

Traxx promoter Gerald Thompson told the GA Voice that he and other friends of Robinson were “trying to hold it together.” The newspaper also reported details of the shooting contained in a preliminary police report:

Residence at Hadlock Street SW called 911 at 0123 hours to report a person injured. Grady EMS and Fire Rescue units were already on the scene. The victim was deceased on scene by an apparent gunshot wound. Residence at Hadlock Street SW heard a commotion in the street followed by a single gunshot and the sound of a vehicle speeding off. The residence advised that when they looked out they saw the victim lying in the street and called 911.