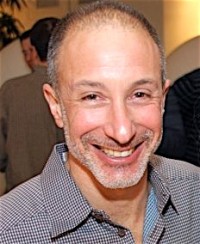 Tough economic times have pushed two local gay, for-profit retail spots to ask their supporters for a helping hand to keep their doors open. For Outwrite Bookstore and Charis Books & More, it seems to be helping.

Outwrite owner Philip Rafshoon (photo), citing a sales downturn and the store’s unique position as one of few LGBT bookstores in the country still open, organized a fundraiser Thursday at Escorpion Tequila Bar & Cantina. DJ Vicki Powell provided the tunes as the store’s supporters noshed and cocktailed during the hours-long event.

Thanks to Riccardo Ullio, Meredith Pruden, and Vicki Powell, we raised $1950 last night at Escorpian for the Capital Improvements Campaign.

The fundraiser comes as Outwrite reworks its business model, tweaks its product offerings and makes plans to upgrade the store.

For Charis, the feminist icon wants to remind its supporters that they remain open and reading (and selling). The store is hosting a Staying in Business Sale! on Aug. 27.

In light of Borders’ recent going out of business sale we decided that Charis should have a “We’re Staying in Business” sale. We know how lucky we are to have customers like all of you and we want to thank you for your loyalty but also remind you that we still need each and every one of your purchases.

In March, Charis announced plans to relocate and rebuild itself into a feminist center as part of a campaign that could cost $1 million.

But Outwrite and Charis aren’t the only gay-owned businesses in Atlanta impacted by a sour economy. So why should customers dip into their pockets to support a for-profit business? Rafshoon addressed that in an interview with Atlanta magazine.

A: “It’s a for-profit business but we’re also a community center. We do something for the community that no one else does. We provide services, we provide space for the community. We function as a LGBT de facto community center because this city doesn’t have one. It’s a tough one but we’re prepared to take the heat on it. This is just the first fundraiser. We want to measure the response and see what people are willing to step up and do.”