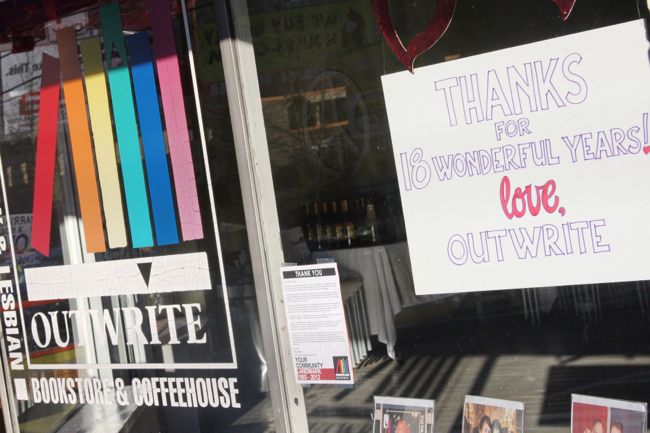 From books to booze, but not a bigger and better Blake’s. The space formerly known as Outwrite will host what the owners of Gilbert’s hope is their expanded bar. The popular but tiny Mediterranean café that sits near Blake’s plans to expand its 1,500-square-foot venue into the 2,500-square-foot space that was occupied by Outwrite until the LGBT retail spot collapsed into bankruptcy in January. The prime spot – with its façade that wraps the corner of Piedmont Avenue and 10th Street – will be used to expand the bar of Gilbert’s, according to What Now Atlanta, which first reported news of the expansion on Saturday. Nervous yet, Blake’s? The venerable gay bar could see increased competition for drink sales and drag shows if the Gilbert’s expansion focuses on bar offerings, as the café already draws a heavily-gay crowd. But don’t expect the disco ball to get turned on anytime soon. Gilbert’s faces months of permitting and the area’s not-so-nightlife friendly neighbors before an expansion begins. (We’re looking at you, Peggy Denby.)

“We’re still negotiating the lease,” [General Manager Keith] Osborne said. The 1,500-square-foot Gilbert’s will more than double in size after it takes over the 2,500-square-foot bookstore space, according to Osborne. “Gilbert’s will undergo several months of permitting with the city before we begin any renovations,” he said.

The remnants of Outwrite are being sold during weekend pop-up sales in March as the store’s founder, Philip Rafshoon, works to chisel away at a massive $184,000 debt he faces for collecting but not paying sales taxes to the state of Georgia for several years as the store struggled financially.