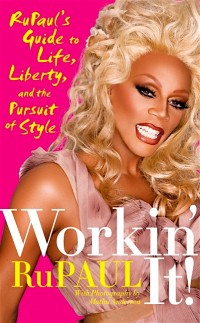 The undisputed Supermodel of the World arrives in Atlanta Tuesday backed by a flowing wake of success on “RuPaul’s Drag Race” and in a new book reminding us all to keep “Workin’ It.”

“RuPaul is the most famous, fabulous drag queen in the world, and I think people love her so much because he’s so positive and inclusive—black, white, gay, straight—and the diversity of his fan base shows how well he has lived up to that,” says Philip Rafshoon, owner of Outwrite, which hosts Tuesday’s ticketed book signing for “Workin’ It: RuPaul’s Guide to Life, Liberty and the Pursuit of Style” (top photo).

“He made his name in Atlanta, and there are so many people that learned from him,” Rafshoon says. “So this will really be a homecoming of sorts for him.”

With two Atlanta queens on this season of “Drag Race” on Logo (Comcast 288), RuPaul nodded to his local roots when Nicole Paige Brooks was graciously asked to “Sashay Away” on last week’s episode. Read all the queeny quips from the episode, and keep an eye on our remaining hometown girl Sonique in our weekly recaps of the show. 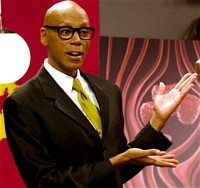 RuPaul is expected to appear at Outwrite sans drag (second photo), a look he’s been working more lately, like in a recent appearance on “Ugly Betty” and in his mentor role on his own show. Tickets to Tuesday’s event are free with the purchase of the book. The event is sure to be packed to the rafters, so be sure to reserve your place at Ru’s table and secure your copy of the book in advance.

In “Workin’ It!” RuPaul brings his singular style to revealing secrets of a fabulous life through outer style and inner beauty.

“To truly create the best life ever,” RuPaul says in an excerpt, “you must begin the work from the inside out. You must liberate yourself and clear away the old mental habits that block you from moving forward. Style is a celebratory expression of your life force. You must approach it with a sense of joie de vivre. Open yourself to all the possibilities!”

For RuPaul, those possibilities are endless if you live your life with no restrictions. But you must first learn the rules—then by all means throw them out! A sassy sampling of the diva’s sage advice:?

· Don’t take life too seriously.?
· Do whatever you want, just as long as you don’t hurt anyone in the process.?
· You cannot thrive in toxic relationships.?
· You need to be present.?
· Kindness is the new cool.?
· Proportion is everything.?
· Reinvention is the key.