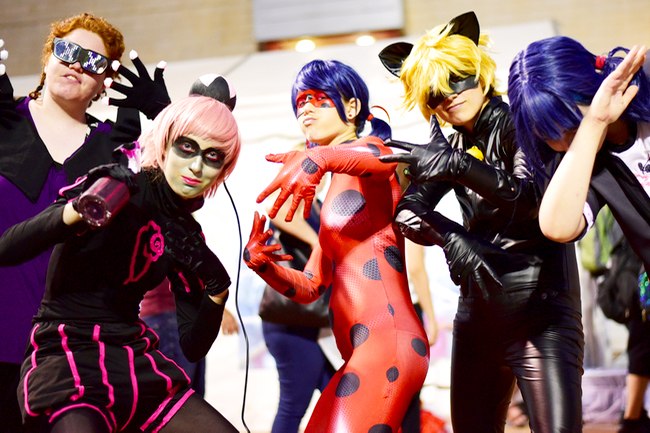 OutlantaCon is right around the cosmic corner as the queer geeks convention gears up for its decade anniversary this weekend.

For those not in the know, OutlantaCon is Atlanta’s LGBTQ convention for sci-fi, pop culture, multi-media and gaming lovers. The local group of the same name throws its  10th event as co-hosts to the the traveling annual national event Gaylaxicon, which returns to Atlanta this year.

Queer writers, comics, an international short film festival, panels allowing guests to choose their own adventure, and an out of this world game show track with fan favorites including Match Game, Giant Jenga, Project Cosplay, Sunday Morning Mad Libs, and even a queer erotica puppet show.

OutlantaCon President Candace Weslosky-Miller says that she could not be more thrilled to take the convention into the future.

“In a lot of ways, me taking over as president is a full circle moment,” Miller explains. “I started out as an attendee, then a guest panelist, track director and now convention president.

To say that the smaller, but mighty, convention is near and dear to Miller is an understatement.

“I can’t begin to describe how much I love this convention,” she says. “It’s really fun, and it is super inclusive. It is all of the wonderful things I remember about the big conventions in their early years.”

OutlantaCon is the longest running sci-fi, fantasy, anime, horror, and gaming convention for LGBTQ people and their allies in the Southeast. They strive to provide high-quality geek entertainment while creating an inclusive environment for everyone who attends.

“This will be our biggest crowd to date,” Millers says. “ Online tickets have already sold out, but tickets will still be available at the door for purchase. This is also the biggest location we have ever had.”

But what makes it so great? In a word, diversity.

“OutlantaCon really is the best con you’ve never heard of,” Miller asserts. “We have gone above and beyond to make sure all of LGBT society will be fully represented whereas they might not necessarily have been represented at other cons in the past.”

As this year’s home to Gaylaxicon, the annual international science fiction, fantasy and horror convention for LGBT peeps and all of their buddies, OutlantaCon comes with the new Gaylactic Empire Couture, a sci-fi/genderqueer fashion show.

Atlanta’s very own Sisters of Perpetual Indulgence host the intergalactic runway style competition, with each sister performing a number between the model walks. If you love cosplay and have always harbored a burning desire to work the catwalk, Gaylactic Empire Couture is your destiny.

“Each year, the sisterhood has to partake in a spring event, so we thought what could be more perfect than partnering with those talented, fabulous girls,” Miller says. “I can only imagine what sparkly, crazy fashions they have in store for us!”

Get ready, Atlanta. OutlantaCon is an IRL fantasy trip that LGBT sci-fi lovers will not want to miss.

“All of our guests, volunteers and attendees are outstanding,” Miller gushes. “They truly represent our community through all of the great work they do. I couldn’t be more blessed to work beside them and share this wild ride with all of Atlanta,” she says.

“Come out and get your OutlantaCon on!”

This article originally ran in Q magazine. Read the digital verson below, and pick us up around Atlanta each week.