Outkast member says he’s a dandy, not a gay 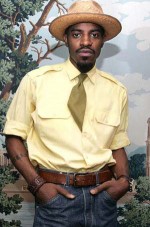 Outkast’s Andre 3000 admits to dressing well, but not to being gay.

“People feel like, just because you like to dress well … that don’t mean you’re gay. I don’t know where that came from.”

That came from a launch party last week for his new clothing line at Barneys.

He wore some of the line, called Benjamin Bixby, himself: a red polo shirt with a big white “X” on the front, loose-fitting jeans held up by suspenders, wide-brimmed fedora (think George Clooney in the recent flop Leatherheads).

“My thing is the 1930s,” explained Mr. Benjamin, who was besieged by admirers near a railing overlooking the women’s floor below and guarded by a publicist. “You had rough guys who played football, but they were impeccably dressed. So now, if a guy wants to wash his face, they call him a metrosexual or whatever. So my thing is, cut all that out. You know? It’s clothes!”