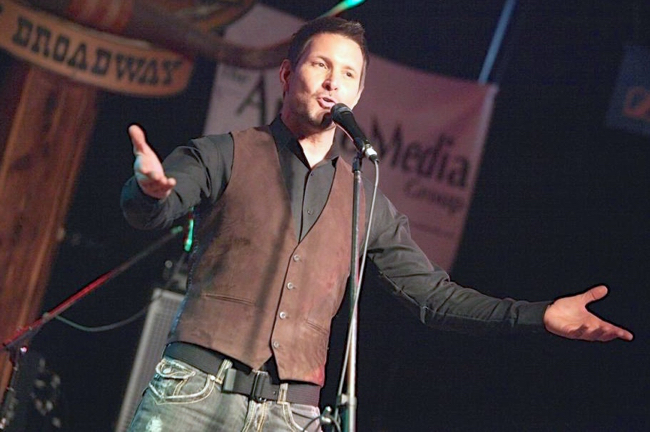 When a Country hunk comes out as gay, the world listens and then he enjoys a broadening gay fan base. When said hunk is Ty Herndon, who already counts scores of gay fans, his next Houston show is a victory lap.

HRC Houston announced that Herndon is scheduled to perform for the 18th annual Human Rights Campaign Gala on April 11 at Westin Galleria.

Ty’s albums “What Mattered Most” and “Living In A Moment” have been certified Gold by the Recording Industry Association of America!

Herndon has charted a total of 17 singles on the Billboard Hot Country Songs charts. This figure includes three number ones: “What Mattered Most”, “Living in a Moment” and “It Must Be Love”, as well as four additional top ten hits: “I Want My Goodbye Back”, “Loved Too Much”, “A Man Holding On (To a Woman Letting Go)” and “Hands of a Working Man.”

It is an unofficial coming out tour, but it won’t be the first time Herndon has serenaded gay Houston. The HRC announcement comes just three months after Herndon revealed that he is gay on the heels of an intimate performance at Houston gay bar Neon Boots.

With the groundwork set by gay Country forerunners Chely Wright and Brandy Clark at his back, the national revelation that he is gay went pretty smoothly for Herndon, he told dozens of gay press outlets at the time.

“Of course, I’ve had so much support from my friends and close family that supported me, that knew I was gay. But it’s been so freeing for the fans to know; the fans in country music, especially. They have really been supportive and awesome. There are always going to be the naysayers and we’ve had a few of those. Ninety-nine percent of the feedback from the fans and in Nashville has been incredibly supportive.”

Herndon heads up an HRC Houston roster of guests that also includes comic Dana Goldberg as emcee and HRC’s national president Chad Griffin as special guest. A packed schedule  is on tap for the black-tie-encouraged event from cocktail hour and silent auction to performances, inspirational speeches, local award winners, and a DJ-driven afterparty.