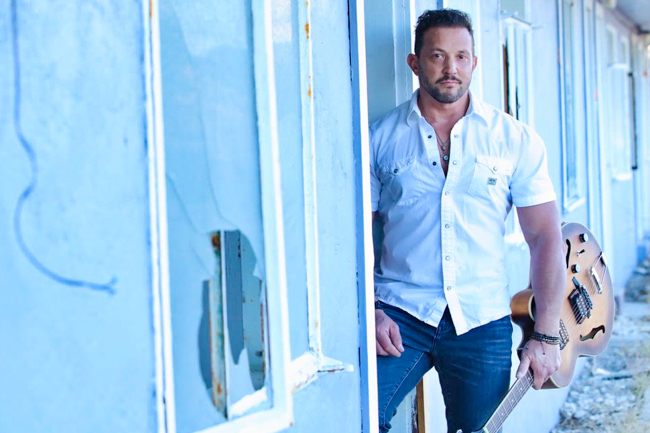 His activism work in Utah helped to ban conversion therapy in the state. Now Justin Utley and his guitar have sights set on Georgia.

“American Nightmare” is the out country singer's first single release since his activism work in Utah helped to ban conversion therapy, the discredited practice that aims to change a person’s sexual orientation or gender expression, in the state.

“The win was not only cathartic but rewarding and empowering,” he reflects. Utah is now the 19th state to ban conversion therapy and Utley has plans to take his fight to the other 31 states, including Georgia.

“I’ll take my guitar wherever I need to in order to keep this conversation going and get this horrific, shame-based sham of therapy banned. It’s unethical, it’s disproven, and yet so many are caught in its web of lies, inevitable failure, and suicide,” he said.

He blames the lawmakers who blindly follow their party lines and church leaders instead of the will of the constituents who elected them. “Finding candidates who will work to unite the country rather than divide us is top priority this election cycle,” Justin says. “I have my sights set on November when hopefully, this nightmare will end.”

We spoke with Justin from his home in Utah.

It’s ironic that you’re releasing a song called “American Nightmare” during a pandemic, wouldn’t you say?

Justin Utley: The timing couldn’t be more impeccable, for better or worse. Most of my spring and summer gigs have been canceled or postponed, so right now I’m focusing on getting the additional music videos released and writing some new material.

The song is really about conversion therapy, which, can you believe, is still legal here in Georgia?

It’s both surprising and not-so when you think of the polarization of politics and religion that’s been boiling. Surprising in the sense that submitting a child to that kind of torture is even legal would surprise most Americans. Not-so, when you throw in the fanatical conservative base, who still believe being gay is a choice, an illness, or something to be fixed. They’re out there, and their voices are louder than ever. Conversion therapy is not only disproven and fraudulent, its abusive and goes against the oath and ethics of the medical profession as a whole.

Tell us about your experience with conversion therapy and the impact it had on your life.

I went through conversion therapy for two years, both in a group setting and through one-on-one talk therapy with a so-called licensed specialist. At first it was elating to know that I was not alone in my struggle with my sexuality. But soon, I was stripped of any identity and dignity I could have had as a gay man, and instead, was told I suffered from an abnormality, a disorder, and they treated my actions as some kind of addiction or illness.  It was one of the most excruciating times of my life.

What were some of the specific methods they employed in the therapy?

At one point, the therapists had me convinced I had been molested as a child in order to explain how I “learned” my behavior/response to the same sex. They teach that gay is a verb, and that you are only gay by action. It put a lot of pressure on me spiritually and emotionally. It put my parents through the ringer as well, since they were used as an excuse as to why I was gay.

What have you done to reverse the damage?

It took seeing a licensed therapist who was unaffiliated with my (Mormon) church and culture to help get me get onto a path of healing, to learn how to cope with what had happened, to reclaim my identity and move forward in healthy relationships and dating.

Do you remain in therapy?

My music is definitely a type of therapy for me. It's cathartic, somewhat of a journal of sorts, and helps me to express my feelings, thoughts, and emotions in a way that reminds myself (and those who listen) that even if you can’t see a silver lining, you can make one.  I also keep to a decent workout routine. That’s been very therapeutic for me, especially during this chaotic time in quarantine.

Things couldn’t be better with my family now, other than having to stay at least six feet apart from them. It took a while to repair the hurt and chaos the conversion therapy had caused. It took my little brother even longer. He was pretty upset, not for religious reasons, but because he had crushes on most of my girlfriends, and he couldn’t believe that I wasn’t into them the way he was.

Have you fully woken up from your “American Nightmare”?

No. It’s still happening now. There are still many states who have not banned conversion therapy, and I’m eager to help get the issue on the discussion table, however I can.

Can we apply the same tactics you used in Utah in states where bills to ban conversion therapy on minors have been introduced?

We had overwhelming public support when the Utah legislature introduced our bill.  At the last minute, it was hijacked by a religiously conservative political group. The matter was then taken to the DOPL (Department of Professional Licensing), who held a public hearing on the issue that included mental health professionals and survivors of conversion therapy.

I participated in a lot of outreach, education, and public awareness campaigns, and testified at a number of meetings and hearings during the time the matter was being decided on by DOPL. In my view, DOPL was the most appropriate way to go since they aren’t held hostage by legislators, and aren’t subject to religious lobbyists and political parties.

Using medical science, they dealt with the issue directly, and made the appropriate decision to ban the practice in the state.

Watch the full video below.

Justin Utley’s “American Nightmare” is available on Apple Music, Spotify and all digital platforms, along with the entire Scars album.  Visit Justin Utley’s website Justinutley.com.  Follow him on Instagram justinutley and on Facebook justinutleymusic.