Out on Film unveils full line-up for Oct. event 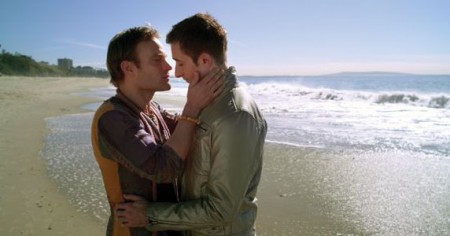 More than two-dozen films are part of the line-up for Out on Film, the gay and lesbian film event set for Oct. 2-8.

Festival organizers released additional details of their schedule on Tuesday, including the event’s opening night reception and screening of “The Big Gay Musical.” Earlier this month, the film festival gave fans a sneak peek of what’s on tap at the festival when they released the titles of seven films to be screened.

But the details offered Tuesday provide a day-by-day breakdown of the event and a more detailed list of films it will offer.

“I am ecstatic about this year’s Out on Film, not just our October lineup, but the support and enthusiasm we have received from the community,” Jim Farmer, the festival’s director, says in a press release.

Farmer says to expect several question-and-answer sessions during the festival, though details of those and the event’s shorts program are still being finalized.

Tickets for the festival’s opening night, which includes the screening and party, are $20. All other screenings are $10.

Descriptions of the films as provided by Out on Film:

“Annul Victory”
If you woke up on Nov. 5 and your elation about Barack Obama’s groundbreaking victory was tinged with sadness because of the passing of Proposition 8 in California, then “Annul Victory” is a film for you. It starts on May 16, 2008 with Mayor Gavin Newsom on the steps of San Franciso City Hall giving a stirring and uplifting speech celebrating the fact that the California Supreme Court had just made same-sex marriage legal.

Through stunning news footage and eloquent and articulate interviews, the movie brings us up to near present day as we await the California Court’s ruling on whether Proposition 8 is constitutional.

“The Baby Formula”
In this hysterical mockumentary, two adventurous women in love are desperate to have their own biological child.

“The Boy With the Sun in His Eyes”
Kevin’s (Josh Ubaldi) funeral rockets John (Tim Swain) into the orbit of the flamboyant Solange (Mahogany Reynolds), a b-movie actress/one hit wonder best known in Europe for her roles in 80’s Italian horror movies. As John follows her into heady whirlwind romances with cute French pop stars and deadly (but hot!) Milanese model managers, they barely survive murderous performance artists in Paris and fatal gourmet food poisonings in Italy. John begins to realize that Solange’s world is far more complex and dangerous than he could possibly have imagined. Her chosen lifestyle abounds with trips, tricks, and traps. Based on the novel by James Derek Dwyer.

“The Butch Factor”
Christopher Hines’ informative, entertaining documentary on masculinity in the gay community not only features several Atlantans, but Woof’s Sports bar as well.

“A Charmed Life”
Through Interviews with three generations of drag performers this all access documentary examines how a queen is conceived and what it means to be a performer. Starring noted New York drag persona Sweetie.

“A Cross Burning in Willacoochee”
(World Premiere)
On the morning of July 21, 1993, an incident occurred in the small South Georgia town of Willacoochee. Two gay men were awakened to find a seven-foot charred cross in their front yard. Further compounding the problem were comments made by a Willacoochee City Council member who said he was not surprised by the incident because the town is largely anti-gay. The Chief of Police described possible suspects with a racial slur.

But the cross burning was just the beginning. A few weeks later their mailbox was destroyed followed by the death threats on their answering machine. Then the unthinkable occurred, their home burned to ruins. Roy Kirkland and Doug Sebastian had no idea that after all that had happened, the worst was yet to come concerning one of the nation’s largest insurance companies. This compelling documentary reveals how filmmakers Doug Sebastian and Roy Kirkland, both hate crime victims, come together to dig further into the reasoning behind the horrible acts committed against them and to tell their story about the time they lived through, “A Cross Burning In Willacoochee.”

“Drool”
The relationship between an abused housewife and her new neighbor yields unexpected tragedy in his drama from first-time writer/director Nancy Kissam. Her kids can’t stand her, her husband is a tyrant and her family may live in the middle of nowhere, but Anora Fleece (Laura Harring) still does her best to make the most out of life.

When Imogene Cochran (Jill Marie Jones) moves in next door, the two women become fast friends. Imogene sells cosmetics for Kathy K. Kosmetics, a company that caters exclusively to the cocoa-skinned woman. Despite the fact that such women aren’t generally welcomed with open arms in Anora’s neck of the woods, it isn’t long before she and Imogene have found a common ground. And before long, their friendship develops into something more serious.

“Eating Out 3: All You Can Eat”
Mink Stole and Leslie Jordan join Rebekah Kochan and the requisite hunky men for the third in the immensely popular series, this time with an all-gay male cast, the requisite frontals and a threeway that needs to be seen to believed.

“Family”
From former Atlantan Faith Trimel comes this breezy African American lesbian comedy, about a group of friends who all decide to come out.

“Ghosted”
In Taiwan, ghosts are rarely a laughing matter; in this ancestor-worship culture, where the memories of the living nurture the deceased, there is a belief that the dead become ghosts roaming between heaven and earth. In “Ghosted” — an unconventional, meditative love story directed by veteran German filmmaker Monika Treat — we are introduced to Sophie (Ingra Busch), a 40-something renowned German video-artist who has returned to Taipei to open an exhibition dedicated to her late Taiwanese lover Ai-Ling (Huan-Ru Ke).

There she meets Mei-Li (Ting Ting Hu), a pushy and beautiful journalist who eerily reminds her of Ai-Ling. Mei-Li’s constant questions and flirtatious overtures are too much, too soon, and Sophie retreats to Hamburg. When the journalist mysteriously turns up on her doorstep, Sophie decides to open herself to new sexual adventures. Her newfound trust is soon shattered when she discovers that Mei-Li isn’t who she claims to be. Suspenseful and complex, this cross-border narrative is a rich addition to Treut’s growing body of work

“Hannah Free”
Starring Sharon Gless (“Queer as Folk,” “Cagney & Lacey”) in a tremendous performance, Hannah Free is a feature film about the lifelong love affair between an independent spirit and the woman she calls home.

“Rivers Wash Over Me”
Fifteen-year-old Sequan Green is a lanky, erudite and very much gay New Yorker. Forced to move in with extended family members in the rural South, this fish out of water finds his new surroundings downright poisonous. Produced by Atlanta’s Dexter Davis.

“Unraveling Michelle”
For years successful filmmaker Joe O’Ferrell has kept his double life as Michelle a secret to all but three people. We observe Joe as he comes to the momentous decision to reveal his secret first to his friends and family, and then to the world as he makes the transition from boy, to girl, from Joe to Michelle.

As the persona of Joe slowly fades away and is replaced by Michelle, how will her family, friends and co-workers react? Will she still be able to find work as a filmmaker or will prejudice and fear sabotage her hopes and everything she holds dear?