The film “A Marine Story” screens Tuesday at Out on Film at a time during which its topic–“Don’t Ask, Don’t Tell”–has never been more timely or hotly-debated in LGBT circles or in the public eye.

After the popular “The Gymnast,” where Weber played a character who she refers to as a Plain Jane, the actress wanted to do an action film. She was reading a lot about gay men and lesbians being ejected from the military when she and her husband, director Ned Farr (“Shelter”), decided to make this film. 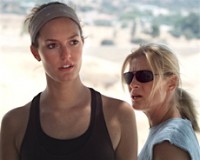 One irony of “Don’t Ask, Don’t Tell” especially bothered them—not having enough troops and intelligence for a war but throwing out linguists because they were gay or lesbian.

In her research, Weber talked to a lot of war veterans and was surprised at what she heard from them.

“I thought those people who had been asked to leave would be bitter, but they all told me it was the best experience of their life and that they would go back in a heartbeat,” she says. “That wasn’t what I expected.”

Weber says that Alexandra is good at her job, an overachiever, the kind of person “you want in the military.”

The actress trained hard for the job, but a lot of her preparation was mental, getting into the psyche of a female soldier and her battle to keep her job and dignity.

Weber says the film has been warmly received at festivals across the country and has given her the chance to talk to a lot of people about the military issue. The film won two awards at Los Angeles’ Outfest: Best Feature and Best Actress for Weber. She just tied for a Best Actress jury award at Out on Film.

She wants her films to entertain, obviously, but is ecstatic when she can combine entertainment with movies that matter and make people talk. One of the best experiences of her life was talking to a man after a screening of the film who was opposed to letting gay men and lesbians serve in the military. He admitted that before he saw the film he didn’t get it, but after getting to know Alexandra in the movie, he understood.

Weber planned to attend the Atlanta screening until she realized Portland’s LGBT festival was screening the film the same day. She had to make a choice and opted for Portland, but she does hope to get here some day.

“A Marine Story” screens Tuesday at 7 p.m. as part of Out On Film at Landmark Midtown Art Cinema. As part of GA Voice Night at Out on Film, there will be a discussion about “Don’t Ask, Don’t Tell” following the screening with local gay veteran Jeff Cleghorn and former officer Melinda Morgan. View Tuesday’s complete Out On Film schedule, including James Franco in the highly anticipated biopic “Howl.” For more information, call 678-237-7206 or visit Out On Film.

Here’s a trailer for the film: