Out on Film offers early look at festival lineup 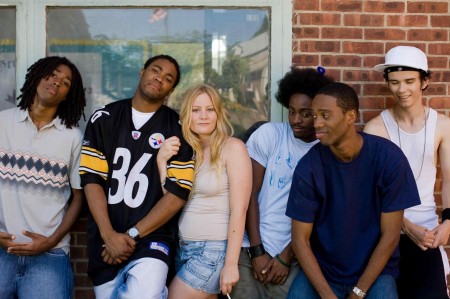 Details of what’s on tap for Out on Film in October are slowly trickling out as organizers of the gay film festival work to rebuild the its once considerable mojo.

An Atlanta indie film that made a splashy debut at the LGBT festival this summer — “Rivers Wash Over Me” (photo) from producer Dexter Davis — will have a prime spot at the Atlanta festival, set for Oct. 2-8 at Midtown Art Cinema. From the AJC’s Peach Buzz:

The film directed by John G. Young unflinchingly tackles the topics of race, homosexuality, death, class and sexual abuse against the backdrop of rural Alabama. It centers on Sequan, a James Baldwin-reading, Brooklyn-based, African-American teen who moves in with Southern relatives after the death of his mother. At the film’s heart, however, is the unique friendship that develops between Sequan and Lori, a white girl from a well-to-do family who’s dating the high school’s drug dealer.

Jim Farmer, the event’s director, also dropped a few other names to Peach Buzz: The festival will debut “The Butch Factor” by Christopher Hines and the film adaptation of gay Atlanta author Jim Grimsley’s “Dream Boy.”

Farmer expanded on the festival’s recent history in a post on his event blog:

2008 was a year everyone involved with Out on Film would rather forget. Not only was the economy tough, but getting the right mix of folks together was harder than anyone thought. Unfortunately, the casualty of last year was a film festival. But luckily the team we have currently assembled has got it right.

Farmer says this year is proving to be the festival’s most ambitious yet.

In October, Out on Film will be having its fall festival, and from here on out it will be every October. Our goal is to make the festival as good as it can be. Having a GLBT film festival is still every bit as important as it’s ever been. Gays and lesbians may be more on TV now and in the public consciousness, but we are no means mainstream. It’s important to have a GLBT film festival – one by, for and about the GLBT community. But the size and scope of the festival depends on our community.

Farmer also urged people to support the event through donations or sponsorships.