Out on Film kicks off lineup with gay jock doc 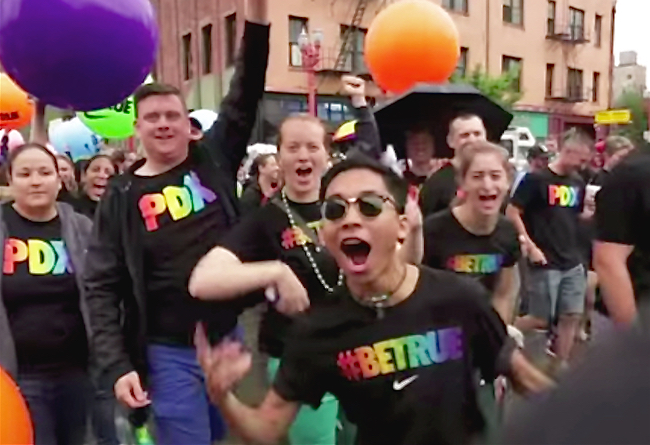 What better time than the gayest month of the year to announce the first entries into Atlanta’s LGBT film festival? Out on Film teases fans with a gays-in-professional-sports documentary and a dark comedy.

Out on Film let the cats out of the bag during its Stonewall Month re-screening of “Pride” on Tuesday. Malcolm Ingram (“Bear Nation,” “Small Town Gay Bar,” “Continental”) directs the pro sports entry “Out to Win,” and Jamie Babbitt (“But I’m a Cheerleader, “Looking,” “Drop Dead Diva”) directs the funny “Addicted to Fresno.”

“Both Malcolm and Jamie are veterans of Out On Film, Malcolm with his ‘Small Town Gay Bar’ and Jamie with ‘Breaking the Girls,’” festival director Jim Farmer says in a prepared statement. “We are excited to have both of their new movies here this year. Not only are ‘Out to Win’ and ‘Addicted to Fresno’ great films, but films that everyone can enjoy and appreciate.”

“Out to Win” (video above) features interviews with, and examinations of, openly gay pro athletes from Martina Navritalova, Billie Jean King and Brittney Griner to Jason Collins, Billy Bean and Dave Kopay, as well as the affect their comings out had on the public zeitgeist. “Addicted to Fresno” employs an accomplished cast of comic actors to follow two co-dependent sisters — a lonely lesbian and a recovering sex addict — working as hotel maids who find a dead body.

Psyche up for the Oct. 1-8 festival with these teasers, but just know that they are the tip of the iceberg. Entries for Out on Film 2015 remain open through July 15, and the full slate of films will be announced in late August.