Out On Film director pulls on his ‘Fishnet’ 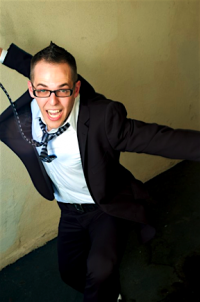 Pelletier’s screwball comedy finds two lesbian burlesque dancers, Trixie (Rebekah Kochan) and Sulie (Jillian Easton), getting mixed up in a mob hit and deciding to hightail it to Sulie’s home back in Texas. Sulie’s parents and the locals have no idea the two women are lovers and that mob members are hunting them down.

Pelletier (photo) was in college when a costume designer he worked with decided to move home and start a burlesque troupe. He romanticized the scenario and wrote a script about it. That first version was in 2006, and he estimates he wrote 10 versions of it in all. He likens the film somewhat to “The Simple Life” with Paris Hilton and Nicole Ritchie, with Trixie as the proverbial fish out of water.

Last year, before his film “Ryan” screened as part of the Men’s Shorts program, Pelletier had a quick bite to eat with actress Rebekah Kochan and director Glenn Gaylord, who were in town as part of the Project Q Atlanta-sponsored “Eating Out 3” screening. He told them what he was working on and pitched the idea of “Fishnet” to them to get their thoughts. Kochan liked the idea – and when Pelletier sent her the script, she decided to do it.

He envisioned Kochan as Trixie but told her she could play any role. She did, indeed, opt for Trixie. He has a lot of respect for the actress’ versatility.

“She is a lot of fun, but I knew she could handle the character and bring out Trixie’s bitchy side,” Pelletier says.

He acknowledges that making a feature film is much more complicated than a short film.

“All the elements are larger – the cast and the crew, the script, the budget, but we managed to shoot it all in 10 days,” he says. “’Ryan’ took only three days to shoot.”

For Pelletier, making “Fishnet” fulfilled a personal goal – making a feature film by the time he was 30. He got it in just under the wire.

“Fishnet” screens as part of Out On Film’s Out On Film’s World Premiere Night Monday at Ansley Park Playhouse, along with Diane Cardea’s “Quentin Crisp: Final Encore.” Out On Film screenings also continue at the Midtown Art Cinema. For more information, call 678-237-7206 or visit Out On Film.

Here’s a sneak peek at “Fishnet”: