Out On Film closes with a little ‘Role/Play’ 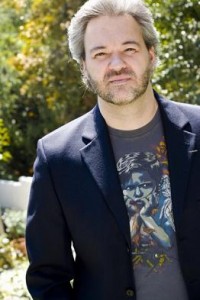 Callahan speaks after Thursday’s screening with director Williams. In the comedy/drama, Callahan stars as Graham Windsor, a soap opera star who is outed as the result of a gay sex-tape scandal. When he seeks refuge at an exclusive Palm Springs resort, he meets marriage-equality activist Trey Reed (Montgomery).

Trey has checked in to escape the fallout from his own bitter divorce. As they each deal with their own professional fallout, the two men discover they have feelings for each other.

When writing “Role/Play,” Williams (top photo) wanted to delve into his fascination with public outings and how the media treats celebrities. He realized, however, that he also had to make the film entertaining if he wanted to deal with certain issues.

“The climate out there made me want to do something political,” Williams says. “I did realize, though, that if you want to use dialogue-heavy scenes, you need to have something else as well, such as nudity or boys at the pool.”

“Role/Play” does not skimp on either. Most of its actors appear undressed at some point during the film.

The director has known both actors (second photo, from film) for a long time and specifically wrote “Role/Play” for them. Montgomery has been in many of Williams’s films and produced them all. He says Montgomery and Callahan work well together and separately.

“They are both fantastic, versatile actors,” the director says. “They worked with me to develop the characters, and they knew exactly what they were doing. It’s also great to work with friends.”

Williams has directed “3 Day Weekend,” “Back Soon,” “Long-term Relationship” and last year’s popular “Make the Yuletide Gay.” He has been on the festival circuit for most of the summer, enjoying the process along the way.

But he admits that “Role/Play” is a change of pace film for him.

“If people come in expecting a wild comedy like ‘Make the Yuletide Gay,’ they are missing the point,” he says. “This is my fifth film. It fits in well with the other films, but it is also unique.”

Here’s the trailer for the film:


“Role/Play: The Movie” screens at 8:25 p.m. on Thursday, followed by a Q & A with direvtor Rob Williams and actor Steve Callahan. The Closing Night Afterparty is set for 10:30 p.m. at Amsterdam. View Thursday’s full schedule. For more information, call 678-237-7206 or visit Out On Film.