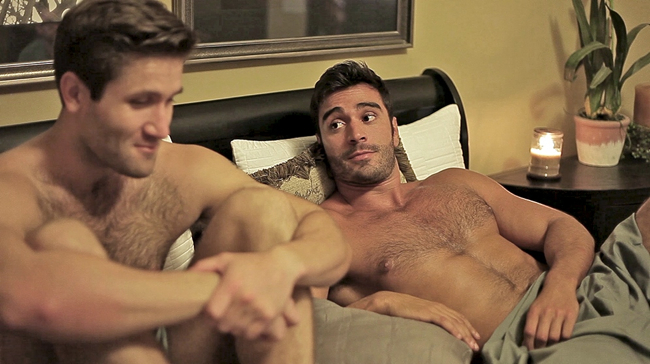 That sound you hear like a freight train hurtling nearer is the rapid approach of Atlanta’s LGBT film festival. After some teases, Out on Film’s full roster is out with trailers, special guests, local flavor, our shortlist of must-sees and a little something for everyone.

Festival organizers on Monday let fly the final cut on this year’s 80 feature films, documentaries, shorts and events set for Oct. 2-9 at Landmark Midtown Art Cinema. Festival passes are available now, and individual tickets are expected to go on sale at the theater in September.

“We are ecstatic about this year’s schedule,” Out on Film Director Jim Farmer says in a prepared statement. “I think we have something for all audiences, and we’ve never had this many offerings available in our history.”

As part of Monday’s announcement, Out on Film pimps the last of its three cornerstone features. Closing Night’s “Eat with Me” (trailer above) reveals what happens after a mother moves in with her gay son. The film joins Patrik-Ian Polk’s already announced Opening Night feature “Blackbird”  and festival Centerpiece “Alec Mapa: Baby Daddy.”

Special events include “Web is the New Black” on the rise of online TV series, Atlanta collective Legendary Children’s “For Filth!,” and a “Super Saturday” of multiple screenings. Principles before and behind the camera from several festival entries, including the three cornerstone screenings, are scheduled to accompany their films to the festival.

With so many choices over eight days, we’re beginning to narrow down our must-see list. Ticking all the gotta-have-it boxes is “Bad Ass Gays,” the latest from former Atlanta resident and Out on Film darling Christopher Hines of “Legalize Gay” and “The Butch Factor.” We’ve been following “More Scenes from a Gay Marriage” since it was a sparkle in the director’s eye. It stars local hottie Jared Allman and A-list model Rodiney Santiago. Another Atlanta favorite is Del Shores' concert film “Naked. Sordid. Reality.” We've had a taste.

Also on our radar are documentaries “Matt Shepard is a Friend of Mine,” “Compared to What: The Improbable Journey of Barney Frank,” “The Dog,” a film about the real-life inspiration for “Dog Day Afternoon,” “Folsom Forever,” and the heralded “Club King” about legendary gay party promoter Mario Diaz. We’re also sure that “For Filth!,” a film collection curated by Atlanta’s own “Legendary Children” drag-art collision, will be a must-have experience.

Watch trailers below from a few entries off of our short list, followed by the announcement of Out on Film's 2014 full lineup with links to all of the available trailers or movie clips.

(Atlanta, GA) (August 25, 2014) Out On Film, Atlanta’s LGBT film festival, has announced its programming for Out On Film 27, the 27thth annual LGBT film festival. The event will take place October 2 – 9, 2014 at Landmark’s Midtown Art Cinema. [Click films in red to watch the trailer.]

The previously announced opening night film is Patrik-Ian Polk’s “Blackbird.” ‘Blackbird” stars Julian Walker as 17-year-old Randy, a devout choir boy living in a conservative Mississippi town, struggling to understand his sexuality while also caring for his mother following his sister's disappearance. The film is the first starring role for Mo'Nique following her Oscar-winning performance in “Precious” and features Isaiah Washington as Randy's absentee father.” “’Blackbird’ is a perfect opening night film for us, kicking off the most diverse schedule we’ve ever produced, “says Jim Farmer, Out On Film’s festival director. “It’s an amazing film with a strong ensemble cast.” Polk (“Noah’s Arc,” “The Skinny”), Walker, Torrey Laamar and Nikki Jane will be in attendance.

The closing night film is David Au’s festival favorite “Eat With Me,” in which a mother comes to live with her son in Los Angeles and has to deal with her feelings about him being gay. “We all fell for ‘Eat With Me’ and I think audiences will as well,” says Farmer. “It’s funny and warm and romantic, with a terrific mother-son relationship at its core. It’s also a terrific food movie – and George Takei pops up for a surprise appearance.” Au will be in attendance for the screening.

The eight-day festival will feature more than 80 feature films, documentaries, short films and special events.  “We are ecstatic about this year’s schedule,” says Farmer. “I think we have something for all audiences, and we’ve never had this many offerings available in our history.”

Other screenings include Andrea James’ previously announced “Alec Mapa: Baby Daddy,” with an appearance by Mapa and James;  Sundance darling Desiree Akhavan’s “Appropriate Behavior;” about a young woman in New York  struggling to become an ideal Persian daughter, politically correct bisexual and hip young Brooklynite;  Daniel Ribiero’s award-winning  “The Way He Looks,”  a feature length version of his short film about a blind young man and the classmate who enters his life; J.C. Calciano’s charming romantic comedy “The 10 Year Plan,” in which two friends vow to be together if they have not found partners in 10 years; Madeleine Olnek’s comedy “The Foxy Merkins;” about two lesbian hookers who wind their way through a world of bargain-hunting housewives and double-dealing conservative women in this female buddy comedy; the Randy Harrison-Michael Urie screwball comedy “Such Good People;” Hong Khao’s beautifully moving “Lilting;” following a mother’s attempt at understanding who her son is after his untimely death.

Other features include Wade Gasque’s family drama “Tiger Orange,” starring Mark Strano and Frankie Valenti (Johnny Hazzard); ); Miguel Ferrari’s “My Straight Son,” in which a gay man going through a tragedy has to suddenly raise his teenage son; Sydney Freeland’s Sundance favorite “Drunktown’s Finest;” executive produced by Robert Redford and dealing with three Native American teenagers; Andrew Putschoegl “BFFs;” about two women pretending to be a lesbian couple at a counseling retreat; Stefan Haupt’s excellent “The Circle,” about the Swiss underground organization Der Kreis and the relationship between two men as they witness the heyday and decline of this Europe-wide pioneering organization for gay emancipation; Kate Johnston and Shauna MacDonald’s audience favorite, the romantic “Tru Love;”  Robin Campillo’s love story/thriller “Eastern Boys;” in which a older gentleman invites an “Eastern boy” to his apartment and realizes he might have fallen into a trap;Matt Riddlehoover’s “More Scenes from a Gay Marriage,” the sequel to his “Scenes From a Gay Marriage,” Mischa Kamp’s “Boys,” about the unlikely relationship between two track stars;  Jane Clark’s slasher comedy “Crazy Bitches;” Israeli director Yariv Moser’s  romance/thriller “Snails in the Rain,”  Eric Schaeffer’s wonderful, genre-bending Southern romantic comedy “Boy Meets Girl;”  Del Shores’ concert film “Naked.Sordid.Reality” and Bruce LaBruce’s “Gerontophilia,” about a young man who develops feelings for a much older man.

Some of this year’s outstanding documentaries are “Compared to What: The Improbable Journey of Barney Frank,”  Sheila Caravan and Michael Chandler’s  look at charismatic congressman Barney Frank; Michele Josue’s moving “Matt Shepard is a Friend of Mine;” Allison Berg and Frank Keraudren ‘s wonderful “The Dog,” examining John Wojtowicz, the real life inspiration behind “Dog Day Afternoon;” Nadine C. Licostie’s “The Last One,” a look at the NAMES Project Quilt; “Folsom Forever,”  Mike Skiff’s look at the annual Folsom Street Fair; Blair Dorosh-Walther’s excellent “Out in the Night” about the New Jersey 4 who were arrested and imprisoned after a homophobic attack; “Born to Fly,”  Catherine Gund’s extraordinary documentary about legendary dancer and choreographer Elizabeth Streb; Matt Livadary and Erin Krozek’s “Queens and Cowboys: A Straight Year on the Gay Rodeo;” David McMahon’s “Skanks,” about the Theatre Downtown theater troupe in Alabama; Charles Lum and Todd Verow’s “Age of Consent,” about the Hoist sex club in London, one of the only surviving leather bars in the area;  Thomas G. Miller’s “Limited Partnership,” about the first male couple to get married in the United States; “Club King,” Jon Bush’s look at legendary nightlife/club promoter Mario Diaz;  Lawrence  Ferrera’s “Power Erotic,” exploring  how dominance and power influence gay male sexuality;and Christopher Hines’ “Bad Ass Gays,” a documentary that tells the personal stories — reality style — of gay men in “manly” professions (soldiers, boxers, race car drivers) going on the job with them, revealing their motives, passions, joys, challenges and struggles to succeed.

A grant from the Academy of Motion Picture Arts & Sciences has assisted Out On Film in spotlighting visiting filmmakers this year. Expected guests include Patrik-Ian Polk, Julian Walker, Torrey Laamar and Nikki Jane (“Blackbird”), David Au  (“Eat With Me”), Alec Mapa and Andrea James (“Alec Mapa: Baby Daddy”), Sheila Caravan (“Compared to What: The Improbable Journey of Barney Frank”), Wade Gasque and Mark Strano (“Tiger Orange”),  JC Calciano (“The 10 Year Plan”)  and Christopher Hines (“Bad Ass Gays.”)  A full list of guest will be available closer to the festival.

Special events at the festival include “FOR FILTH!,” a collaboration with Legendary Children highlighting experimental short films from regional filmmakers and “Web is the New Black,” in which web series originators show some of their work and talk about the rise of Internet series.  Out On Film will also have its first ever Animated Shorts block.

Since its official inception in 1988, Out On Film has grown to become one of the major LGBT film festivals in the country. The organization became independent in 2008 and in 2011 expanded to eight days. The 26th anniversary film festival in 2013 was the most attended in the organization’s history.

New Voices. First time features from filmmakers such as David Au (“Eat With Me,”) Sydney Freeland (“Drunktown’s Finest”) and Daniel Ribiero (“The Way He Looks”)

Super Saturday. In addition to a set of women’s and men’s short films, at least eight other films will be shown on Saturday, October 4, including “Alec Mapa: Baby Daddy,” “Tiger Orange,” “The Foxy Merkins,” “Drunktown’s Finest,” Compared to What: The Improbable Journey of Barney Frank” and “Folsom Forever.”

Shorts Programs. Out On Film will feature at least seven sets of shorts programs and free noontime shorts from Monday, October 6 – Thursday, October 9. Out On Film will also screen the 2014 Oscar-nominated “Facing Fear” as part of this year’s festival, as well as Glenn Gaylord’s “If We Took a Holiday,” in which a gay man spends his birthday with a Madonna impersonator.

The festival will be held at Landmark’s Midtown Art Cinema. The host hotel is the W Atlanta – Midtown. Returning this year will be the Out On Film VIP Lounge, sponsored by Apres Diem and Absolut. Festival passes are on sale from Out on Film, and individual tickets and three packs will be available via the theater approximately September 1.

Complete screening information will be updated daily on our website and Facebook page as well as information on community events scheduled before and during the festival. Out On Film can be reached at (678) 237-7206.