Out On Film actor, from ‘CSI’ to ‘BearCity’

When “CSI” star visits Atlanta Wednesday night for the Out on Film screening of “BearCity,” it’s a return to a place he spent much of his life and where he started his career as a performer.

The film, a hirsute “Sex in the City,” is a romantic comedy about a group of New York bears as they prepare for a big bear weekend. Tyler (Joe Conti, top photo with McCullouch) is a closet cub who makes the discovery that he likes bears, a fact that his friends don’t seem to understand.

Tyler takes a liking to Roger (McCullouch), a “silver fox” stud who plays the field and isn’t above one-night romps.

The openly gay actor, who plays Bobby Dawson on “CSI,” will answer questions after the Wednesday screening. McCullouch admits he was not well-versed in bear vernacular before he took on the role. One thing that “BearCity” director Douglas Langway explained to him is that the bear culture is more a state of mind, an acceptance of all kinds of body types. 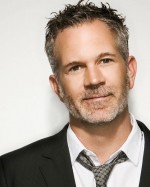 McCullouch (second photo) initially passed on the role of Roger, thinking that it wasn’t really in line with what he could do, but Langway played with the script some until McCullouch agreed. He says that playing Roger was a lot of fun and an opportunity to stretch.

“It’s a great role, and it allowed me to find a side of me that I had never explored,” McCullough says. Included in the film are several nude scenes. “Yes, it’s a sexual film,” he agrees.

The actor, part of Out Magazine’s Out 100, has been promoting the film at festivals around the world and is ecstatic at the reaction.

“It’s not just from the bear community or the gay community, but a wide spectrum of audiences,” he says. “Hopefully, this movie shows that we are all the same.”

McCullouch and his family moved to Atlanta when he was in junior high school. He got his first professional gig here at Six Flags Over Georgia. After leaving the area for a while, he returned and attended Georgia State University and did some work at Theatre in the Square.

He likes to joke that he lives nowhere, since he has moved around so much in his life. His sister, who still lives here, bought a brick for him at Centennial Olympic Park so that he has a “home,” and the actor always likes to go and visit the brick when he is in town.

Being openly gay has never been an issue with his career, McCullough says.

“It’s always been my path,” he says. “I’ve never had a job that has had tremendous stature, so I have been able to live the life I want to.”

Ironically, he feels that the attention he’s getting for “BearCity” has almost eclipsed the notoriety he has after several season of “CSI.”

McCullouch looks forward to seeing old friends at Wednesday’s screening and Q&A, as well as later at the Atlanta Eagle afterparty.

“BearCity” screens at 7:10 p.m. Wednesday at Midtown Art Cinema as part of Out on Film. View Wednesday’s full Out On Film lineup at Midtown Art and Ansley Park Playhouse. For more information, call 678-237-7206 or visit Out On Film.