Out Front rethinks ‘Sordid Lives’ with a groundbreaking twist 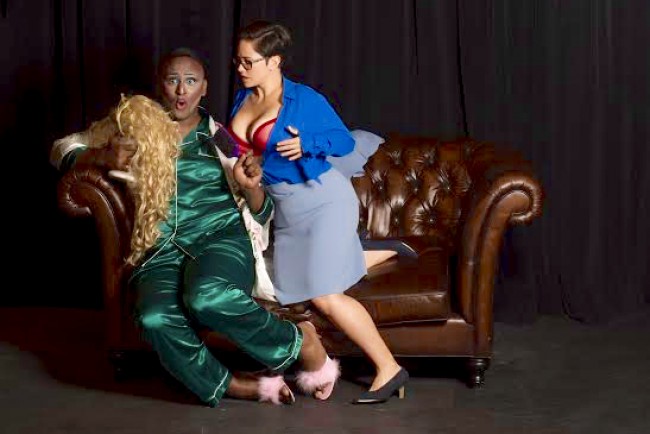 Jacob Demlow could have easily followed a traditional route with his upcoming version of Del Shores’ beloved “Sordid Lives” and pleased a lot of audience members attending Atlanta’s LGBTQ theater company. Yet realizing that a new approach might work, his take features an all African-American central family at the heart of the comedy.

The production, opening May 3 at Out Front Theatre Company, is Shores’ Texas-set 1996 play with such beloved characters as Brother Boy, Sissy, Noleta, Latrelle and LaVonda. They form the nucleus of a family coping with the accidental death of the family matriarch. It spawned the cult classic 2000 film, with gay actor Leslie Jordan as Brother Boy.

As director, Demlow knew going in that it would be a challenge to please some die-hards, especially those who can recite the dialogue.

“It’s difficult, because people know and love this. It’s so iconic,” he says. “I wanted to flip it on its end, for it to be different. Now it’s a new look.”

“I said to myself, ‘What would it look like if it were a black family instead?’ I talked to Del, and he was completely on board and supportive.”

Other than a few line changes, Demlow says it’s the same show that people have grown to love over the years. He says an African American version has been staged before, but this is the first one cleared by Shores.

Jason-Jamal Ligon, who was part of Out Front’s “Priscilla, Queen of the Desert” ensemble,  stars as Ty, the gay son of Latrelle who is closeted to his family but is about to tell his mother the truth.

“He is coming back to his grandmother’s funeral,” Ligon says. “He is a soap opera star and has been playing it straight. His uncle Brother Boy is in a mental institution, and his grandmother put him there. Ty is reluctant to come home to that environment, having to butch it up and go back into the closet back home.”

The role is definitely relatable to play, the actor tells Q.

“I am originally from South Carolina, and this still happens,” Ligon says. “I will go to church, and people often ask are you married yet? I don’t feel like getting into it sometimes. The show took place in the ‘90s but is still relevant.”

TK Habtemariam plays the hilarious, Tammy Wynette-loving drag role of Brother Boy, a part he says is not terribly far from who he is. When he heard of the new production, he knew he wanted in.

“I also do drag on the side and I went to school for acting and directing,” Habtemariam says.  “It’s the perfect melding of both worlds. Brother Boy and I aren’t that different. He is very flamboyant. I remember seeing the movie and realizing why it is such a cult classic.”

“It’s funny to see this country, hick family through the lens of a black family,” he says. “It goes to show that anyone can be country.”

Fans of Shores will get a chance to see him during the production as well. He will be in town for the May 19 and May 20 performances. The weekend also includes a screening of his sequel, A Very Sordid Wedding, as well as a staging of his new one-man show, Six Characters in Search of a Play.

“Sordid Lives” runs through May 20 at Out Front Theatre Company, 999 Brady Ave. ‘Sordid Wedding’ screens on May 19, and ‘Six Characters’ stages on May 20. Visit outfronttheatre.com.

Photo of TK Habtemariam and Jessica Maguire by Brian Wallenberg.

This article originally appeared in Q magazine. Pick it up around town, and read the full issue below: