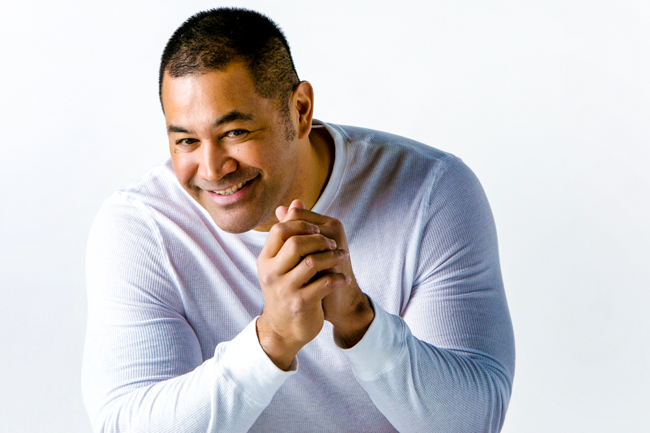 When Esera Tuaolo comes to Atlanta Super Bowl Week, it will be under very different circumstances than when he played in the big game as a member of the Atlanta Falcons in 1999.

Tuaolo was in the closet at the time, and it was starting to wear on him.

“We’re in Miami and sitting in the lobby with a bunch of players on the team, and their families come in and they’re introducing them to players and coaches,” Tuaolo tells Q. “My partner walks in, and he walks the opposite direction. [When he did], everything walked out for me. To make it to the Super Bowl and not be able to share it with the person that you love was heartbreaking.”

Tuaolo retired later that year. In 2002, he came out, making him only the third former NFL player to do so. To date, still no active players have ever come out in pro football, so he has become one of the faces of out athletes in the U.S.

On Jan. 29, Tuaolo hosts some of his fellow LGBTQ athletes and coaches, as well as sports allies, during a pair of events through his nonprofit, Hate Is Wrong, which champions diversity in sports and fights bullying among youth.

The Hate Is Wrong Inclusion Panel at the Center for Civil & Human Rights features Falcons Assistant General Manager Scott Pioli, gay Olympic Gold Medalist Greg Louganis, and former Atlanta Falcons Assistance Katie Sowers, who is out in her current position as San Francisco 49ers Assistant Coach. Others on the panel include an Adidas executive, a legendary sports writer and Tuaolo himself. The event is free and open to the public. RSVP through the Center for Civil & Human Rights.

From a Saying to a Mission

Tuaolo says that after he came out, it was a dream of his to bridge the gap between the LGBTQ community and the NFL. The name of his nonprofit comes from a saying he used during his playing days.

“If anyone said anything sexist, or racist or homophobic, I would say ‘Hate in any form is wrong,’ and it sort of caught on,” he says.

Tuaolo began advocating for LGBTQ inclusion across the country through speaking engagements and on programs like “The Oprah Winfrey Show” and “Ellen.”

“It’s the Super Bowl. The whole world watches the Super Bowl,” he says. “For us, it was the opportunity to get the idea of diversity and inclusion out.”

The NFL and host team Minnesota Vikings supported the idea, and they even got a title sponsor in sportswear giant Adidas. Money raised through the event went to nonprofits in the Minneapolis area.

“We’ll do the inclusion party in every city that the Super Bowl plays, and the money will stay in that city,” Tuaolo says.

Tuaolo’s Atlanta events will benefit the LGBTQ Institute at the Center for Civil & Human Rights. The Institute will direct all funds raised through the events toward anti-bullying efforts in Georgia.

“On the eve of the Super Bowl, it's important to understand the greater power sports can play in advancing equity,” says Ryan Roemerman, LGBTQ Institute executive director. “Having sports leaders share their experiences helps us find ways to make sports welcoming for all.”

Tuaolo says that adding a panel discussion to this year’s Hate Is Wrong events was an effort to further bridge the gap between the NFL and LGBTQ people.

“We know what the problem is. We know the hurt and stuff we’ve gone through. So now, let’s talk solutions,” he says.

Tuaolo says he hopes to see an active NFL player come out soon. Michael Sam was the first openly gay player drafted in 2014, but he never played in a regular season game.

“In order to get somebody out there, we have to make sure that the environment is safe for them, that they feel welcome. That they don’t feel scared of losing their job,” Tuaolo says. “Everything we went through — living with depression and suicidal tendencies — can you imagine what kind of athletes we would have been if we didn’t have to deal with that?”

“We’re definitely moving forward but we just have to keep pushing, opening doors and educating people. When we’re done with all of that, then someone will come out,” he adds.

Tuaolo says he puts so much effort into LGBTQ inclusion in sports because he doesn’t want players to feel like he felt on Super Bowl week in 1999.

“I want the day that when their partner walks in, they can introduce them to the players and coaches and front office staff.”

Catch the impressive full lineups of both events below.

Project Q and Q magazine sponsor the Hate Is Wrong Inclusion Panel on Tuesday, Jan. 29 at Center for Civil & Human Rights, 3 p.m. Free with RSVP via the center, as well as the Hate Is Wrong Inclusion Party that night to fight bullying in Georgia at Buckhead Theatre, 7 p.m. Visit buckheadtheatre.com or hateiswrong.org for tickets. Super Bowl LIII is Feb. 3 at Mercedes-Benz Stadium.

A version of this article originally ran in Q magazine. Read the full issue below.

The fit-starts of spring weather and a fresh season of Hotlanta Softball League were a fitting pair for Midtown Moon on Saturday. That's because...
Read more
Nightlife