Out expert invites you to ‘My Southern Pantry’ 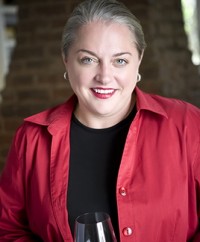 Out Atlanta chef, cookbook author and TV foodie Virginia Willis knows what you like, gay Southerners: mama and granny’s kitchen sensibilities with modern, sophisticated twists. And she invites you to taste the results for yourself.

The Cook’s Warehouse in Ansley Mall features a “My Southern Pantry” demonstration class with Willis (photo) on Thursday evening. The class is perfect for serious cooks as well as spectators who just like generous samples, Willis says.

“My recipes are for ‘mere mortals,’” Willis says. “It’s sophisticated, but what I try to do is use good ingredients and do as little to them as possible, so it’s hard to mess them up.”

That’s not to say that Thursday’s menu–Oven Roasted Tomato Soup with Gruyere Custards, Spiced Pork Loin with Candied Shallot Marmalade, Savory Sausage & Grits, and a Chocolate Duo of Old Fashioned Fudge and Georgia Pecan Brownies—won’t wow you. It will. But the goal is to enjoy yourself, she says.

“My classes are not serious, they’re fun,” insists the pedigreed French and Southern chef who has prepared meals for discerning diners that include Martha Stewart, Bill Clinton and—ahem—Julia Child.

A graduate of L’Academie de Cuisine and Ecole de Cuisine LaVarenne, Willis is the author of “Bon Appétit, Y’all! Recipes and Stories from Three Generations of Southern Cooking” and the 2011 follow-up release “Basic to Brilliant, Y’all: Recipes and Recollections of a Southern Culinary Journey.”

Don’t be intimidated. “We get in the kitchen and make you smile,” Willis assures. “People are very comfortable there.”

Her classes are big events, but very welcoming ones that would make a perfect date night, she suggests. With an openly lesbian teacher, of course that includes gay dates, too.

The chef says that her Midtown class on Thursday, which includes some sneak peeks at recipes from her upcoming book, is likely to draw some gay interest. But being gay has nothing to do with her cooking or why she invites you to enjoy learning from her.

“Being gay is part of my life,” she says. “I also have green eyes and brown hair.”

What clearly defines Willis is cooking, which she picked up from her mother and grandmother as a child.

“I love to cook, and I love teaching,” she says. “I can be having the worst day ever—running late, groceries falling out of the pickup or whatever, and I get to class and lose myself in it. I try to make everyone there feel the same way.”

In addition to mouth-watering samples, Thursday’s class includes a packet of recipes and samples of wine.

“Each portion isn’t as much as a full meal, but I believe in giving hearty samples,” Willis says. “With the economy and people making choices about how they spend their money, I make sure it’s worth it. Don’t eat before you come.”

Willis cooks and teaches her “My Southern Pantry” class at Cooks Warehouse on Thursday, Dec. 9, from 7 p.m. to 9 p.m. Reserve your place at the table.