Out actor Scott Evans explores a fizzling relationship in ‘Sell By’ 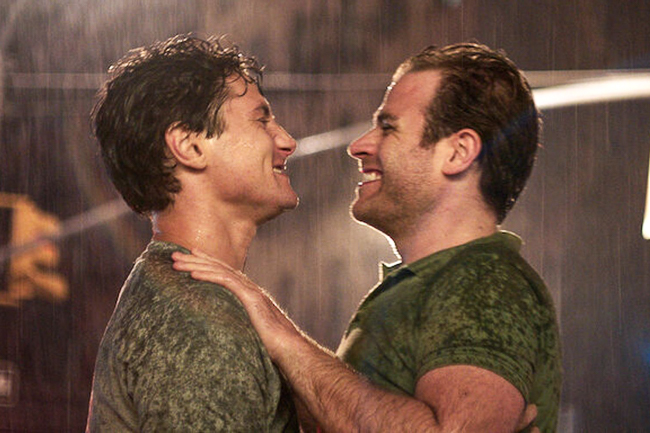 Does queer love have an expiration date?  What happens when your five years into a relationship that’s lost its spark, and your support network is crumbling around you?

That’s the dilemma in director Mike Doyle’s Sell By, screening on Sept. 28 as a Q Spotlight at Out on Film.

The Sell By premise hit close to home for out actor Scott Evans (One Life to Live, Grace & Frankie), who stars as Adam (photo, right) alongside Augustus Prew as Marklin (left) in the film.

“There were some things that I would read in the script where I hated that I related to him so much,” Evans tells Q. “I just know so many couples who tell me this is real thing. What I’ve heard from a lot people, whether you’re gay, straight, whatever you are, you find something to relate to this.”

Evans, who is the younger brother of Captain America himself Chris Evans, first laid eyes on the Sell By script in summer 2018.

“Reading the script where the main couple is a gay couple and it didn’t even seem like a gay couple — it was just a couple,” he said. “I grew up not seeing those relationships on screen.”

Evans sent in audition tapes then Skyped with Doyle, who he knew through friends. After that it was off to New York City for a month to film.

“He is probably my favorite director that I’ve worked with,” Evans says. “The script was so personal and close to him. We got extremely close. It really changed my life, and I told him that.”

The film also stars Michelle Buteau and Zoe Chao as the Evans character’s best friends. Kate Walsh (Grey’s Anatomy) and Chaz Lamar Shepherd play a couple on the brink of divorce after 15 years of marriage. Even the great Patricia Clarkson provides a funny cameo in the film.

Sell By has become a darling of the LGBTQ film festival circuit, including a premiere at the Inside Out Festival in Toronto, Outfest in L.A. and Frameline in San Francisco. Evans and Doyle are expected at the Out on Film Festival screening as well.

Sell By screens at Midtown Art Cinema on Sept. 28, 9:15 p.m. It's just one of the Q Spotlight screenings during the festival. Watch the preview below, and visit outonfilm.org.

This interview originally appeared in Q magazine. Read the full issue below: