Our milestone is your Project POP Happy Hour 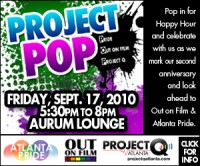 It’s been quite a road since a local sports blog expanded to become Project Q Atlanta. Two years later, we need a drink. Friday’s Project POP right after work celebrates your role in our success and gives back to local non-profits at the same time.

The Project POP happy hour marks our second anniversary as a regular stop for what’s up in gay Atlanta, and it makes us think back to how far we’ve come. Our first post on Aug. 21, 2008 was a soft launch that took readers of GayTLsports to the new site and laid out our dreams for Project Q. Today’s blog surpasses them, says Matt Hennie, our founder.

“The idea was to take the coverage I was doing of all the gay sports organizations and broaden it to cover all the groups and events that interest queer Atlanta,” Hennie says.

“The response grew, and so did the coverage and interactive features, and with the addition of a business partner last year, the growth took on a life of its own,” he adds. “We’re really proud that every day, we can include news, pop culture, sexy snippets, opinion pieces, an extensive interactive events calendar and what we think is the best collection of photo galleries in town.”

In the last year alone, traffic on Project Q has increased nearly seven-fold, and we can’t thank our loyal readers and advertisers enough for making us a regular part of your gay media diet. From our daily “gay things to do in Atlanta” and a tantalizing Morning Fix of flesh to our afternoon rambles through the day’s top headlines, recaps of your favorite TV shows, and blow-by-blow coverage of historic news like the Eagle raid, its aftermath, and its ongoing implications, that’s just the beginning of what we offer, and we’re still aiming higher.

But enough about us and back to your party. In addition to the second anniversary of the blog and the first anniversary of our partnership and a Project Q 2.0 redesign, Project POP Happy hour on Friday at Aurum Lounge serves as a warm-up for a fall season teaming with gay events. 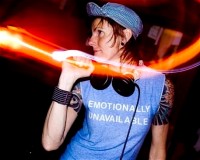 The happy hour brings us together with two of the biggest—the 40th annual Atlanta Pride and 23rd season of Out On Film, and Project Q is a sponsor of both events. Help us mark our milestones and bring on the new season with beats by DJ Vicki Powell (second photo), a spread of munchies, swag bags with cool stuff for early arrivals, and a chance to belly up to the bar, bend our ear and raise a toast.

Special thanks to several local businesses that are providing swag for our bags: Brushstrokes, High Museum of Art, Georgia Aquarium, Lifeforward and the Hope Clinic, Swinging Richards, Carma Productions and Gayborhood, Mix It Marketing, Prima Printing Indulgence and Piedmont Bark. Pride and Out on Film are also stuffing select bags with some goodies.

Pride takes place Oct. 9-10, and Out On Film screens Oct. 1-7. Representatives and supporters of both will be at Project POP with bells on. The two organizations split 100 percent of the suggested $5 donation at the door, though that’s not required to come in and have fun.

Whatever you’re doing Friday night, we hope you pop in for Project POP happy hour before you pop off to the rest of your night, your weekend and the big fall season. RSVP at our online invitation and let us know to expect you.

Keep an eye out for us snapping your photos at just about every big event in town, and please keep coming back to see not only what we’re up to, but more importantly, what you can get into on any given day. If you’re not already, you can also get our most recent posts and events on Facebook, Twitter and through our weekly eblast.