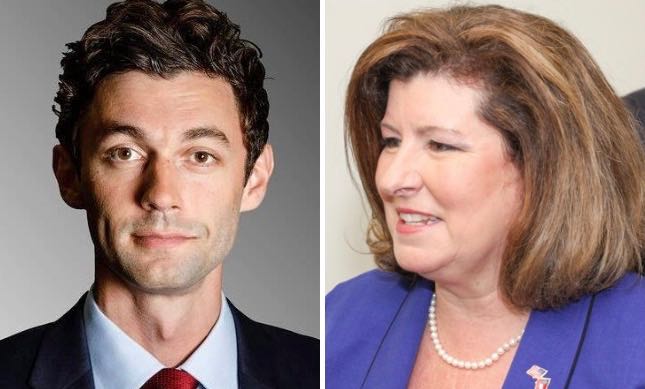 Democrat Jon Ossoff came close to pulling off a stunning upset in a suburban Atlanta Congressional District but now faces Karen Handel in a runoff that pits two candidates who are quite different on LGBT issues.

Ossoff won 48.10% of the vote on Tuesday, narrowly missing the 50% he needed to win the 6th District seat. Handel placed second with 19.78% in a race that included 18 candidates. The two square off in a June 20 runoff.

Ossoff, running his first campaign for elected office, is ready for the fight. Via the AJC:

Casting his high-40s performance in the vote as a “victory for the ages,” he said he and his supporters “shattered expectations” in the Republican-leaning district.

“So bring it on. Because we are courageous,” he said. “We are humble. And we know how to fight.”

Handel, a campaign trail veteran, is ready too. Via the AJC:

“Beating Ossoff and holding this seat is something that rises above any one person.”

When it comes to LGBT issues, the runoff will provide stark contrasts between Ossoff and Handel. Ossoff is a 30-year-old progressive, while Handel is a 55-year-old reliigous conservative. They are battling to replace former U.S. Rep. Tom Price, the Republican who is now U.S. Secretary of Health & Human Services. Price fought LGBT equality most every change he had as a lawmaker.

Ossoff has excited LGBT and progressive voters, pledging to be “a strong and outspoken ally of the LGBTQ community” in an interview with the Georgia Voice. He quickly rose to the top of an LGBT-friendly group of Democrats in the race. Here's how his campaign website addresses LGBT issues.

As our representative in Congress, Jon will fight tirelessly against discrimination, hate speech, or violence against Americans on the basis of their race, religion, gender, sexual orientation, or place of birth.

Ossoff's support of LGBT issues has been rewarded with an endorsement from the Pride Fund to End Gun Violence, which backed him in March.

“With former Georgia Rep. Tom Price’s recent confirmation as Secretary of Health and Human Services leaving an open seat, this special election is a prime opportunity to elect a Democratic candidate who will stand up and speak out for LGBTQ equality,” the group said.

Jason Lindsay, the PAC's founder and executive director, told the Georgia Voice that Ossoff was an easy choice for the organization.

Lindsay said the PAC reviewed Ossoff’s platform and record, and said he represents “the kind of leader we need — one who won’t prioritize special interests over Americans’ civil rights and safety.”

Ossoff also has the backing of Rep. John Lewis, the longtime Atlanta representative beloved by LGBT advocates for his staunch support of equality issues.

Ossoff's campaign has also excited LGBT politicos, who have hosted house party fundraisers for the campaign and endorsed him. Reps. Karla Drenner and Sam Park, two of the four openly LGBTQ members of the Georgia legislature, were among several state lawmakers who backed his campaign during a March 30 event at the State Capitol.

Handel brings her complicated record on LGBT issues to the race.

In the early 2000s as a candidate for the Fulton County Commission and later its chair, Handel sought out LGBT support and became a member of the Log Cabin Republicans. As chair of the commission, Handel supported a grant for a non-profit that helped LGBT youth.

But by 2006, when she was elected Secretary of State, and later in a hotly contested GOP primary for governor in 2010, Handel disavowed her LGBT-friendly positions of the past. She came out against civil unions and same-sex marriage, said she agreed with banning adoptions by gay parents, criticized “liberal judges” for striking down a gay marriage ban in California, and opposed federal benefits for LGBT domestic partners.

In 2014, in a GOP primary for U.S. Senate, Handel didn't step back from her anti-LGBT views. She doubled-down, even suggesting that being gay is a choice. Via Politico:

In the interview, she wouldn’t say whether she believes homosexuality is a choice.

During those races, Handel's opponents – including now Gov. Nathan Deal and former U.S. Rep. Phil Gingrey – criticized her for the LGBT-friendly approach she took on the Fulton County Commission.

But when she jumped into the Congressional race in February, Handel had evolved from her anti-gay benders of past campaigns to comfortably using the phrase “LGBTQ,” denying that she ever suggested that being gay is a choice, and offering a thoughtful answer on her views about LGBT issues.

“It's no secret that I'm called to a different place, maybe, for some of the beliefs in the LGBTQ community because of my faith,” Handel said. “With that said, I'm also called to be accepting and compassionate.”