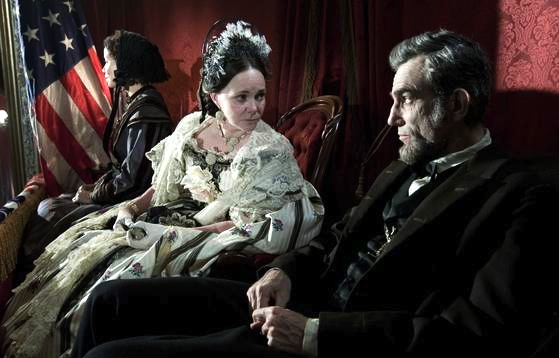 As expected, the gay-penned “Lincoln” is the most-nominated movie in this year’s Oscar field. Nominations were announced Thursday morning for the gay awards lovers’ extravaganza scheduled for Feb. 24. 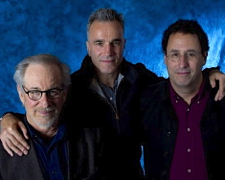 Steven Spielberg’s drama (top photo) was a slight favorite going in and is now in a domineering position, thanks to some major snubs in other categories. “Lincoln” leads the pack for the 85th annual Academy Awards with 12 nominations including Best Picture. Boasting several of the night’s surest things, the film’s openly gay playwright Tony Kushner (second photo, right, with shoo-ins Steven Spielberg and Daniel Day-Lewis), seems a solid bet to win in Best Adapted Screenplay.

Following closely behind are “Life of Pi,” from “Brokeback Mountain” director Ang Lee, the divisive musical “Les Miserables” and “Silver Linings Playbook,” all of which also received Best Picture nominations.

Other films with gay principals and gay angles that received nominations were “How to Survive a Plague,” David France’s excellent documentary about the early days of AIDS. Kirby Dick’s “The Invisible War” – also up for Best Documentary – looks at rape in the military and includes a lesbian as one of its subjects.

The wonderful, gay-themed “The Perks of Being a Wallflower” with queer lead Ezra Miller was skunked in all categories. Javier Bardem’s gayish villain in “Skyfall” was not nominated, and the gay-themed “Bully” missed a Best Documentary nod as well. Besides Kushner, the gayest thing about this year’s awards may be the new Oscars ballot iPhone and Android apps for those who can’t put down their phones.

Here’s a look at the early favorites.

This should come down to a two-lady race. The frequently nude Hunt gave one of her finest performances but she has already won. Adams is overdue but people are split over “The Master,” and Weaver is in mostly because of Harvey Weinstein and the “Silver Linings Playbook” momentum. That leaves Field and Hathaway, both outspokenly pro-LGBT with gay men in their immediate families. Field is two for two in Oscar wins. Her performance is showy but not really crucial, but she is in the movie du jour. In “Les Miserables,” Hathaway overacted somewhat but this still seems like her year; she was also surprisingly effective in “The Dark Knight Rises” last summer. But someone please tell her to wear panties on the red carpet this go-around.
Prediction: Hathaway, although Field is a potential spoiler. If she wins her third Oscar, it’s proof that the Academy really, really, really likes her.
Preference: Hunt

It’s official. The Academy doesn’t care for Leonardo DiCaprio. Another year, another snub. He could have easily won for “Django Unchained.” He joins a long list of men who should be here — Samuel L. Jackson for “Django,” Ezra Miller for “The Perks of Being a Wallflower,” Matthew McConaughey for “Magic Mike” or “Bernie,” even Dwight Henry as the proud father in “Beasts of the Southern Wild” or Eddie Redmayne in “Les Mis.” Frankly, this category is a near joke – everyone here has won before. Jones has the clearest chance because of what right now feels like a “Lincoln” sweep. Let’s hope it’s the first category of the evening and passes quickly. It will make a perfect opportunity for a bathroom break or to refill one’s drink. Or check Grindr.
Prediction: Who cares? Probably Tommy Lee Jones.
Preference: A non-nominated DiCaprio, Jackson or McConaughey, whose career-best 2012 included “Killer Joe” and playing gay in “The Paperboy.”

Although neither were expected to make it, a case could be made for Jack Black, playing gay in “Bernie,” or openly gay Alan Cumming in “Any Day Now.” Both were terrific in movies that slipped through the cracks. Of those who are nominated, Jackman made a sturdy Valjean in “Les Miserables” but it doesn’t feel like his time. Washington has won – twice – even though he completely nails his role as an alcoholic in “Flight.” Cooper showed his versatility – no cracks, please – in “Silver Linings Playbook” but his spot should have gone to John Hawkes in “The Sessions.” At least Cooper will bring an interesting date. Phoenix got some of the kindest reviews of his career for “The Master” but his disdain for awards shows means he has little chance. In a nutshell, Daniel Day-Lewis has owned this award since the movie premiered.
Prediction: Former winner DDL is the shoo-in of the whole evening
Preference: Washington

Marion Cotillard was considered a candidate for “Rust and Bone,” but her exclusion wasn’t a huge shock. This category features the oldest nominee ever – Riva – and one of the youngest, Wallis, whose Hushpuppy was one of the indelible characters of 2012. Both women have their supporters, as do Chastain, Lawrence and Watts. Lawrence was the favorite a few months back, then momentum shifted to Chastain. A last-minute push for “The Impossible” muddied the field.
Prediction: Slightly leaning towards Lawrence, especially because of the film’s broad appeal and her success with “The Hunger Games.” She also has Harvey Weinstein’s considerable clout in her corner. Nonetheless, a case could be made for each actress.
Preference: Watts or Wallis – or Chastain even, who was robbed last year. Lawrence winning will give me gas.

Two apparent shoo-ins were left out – former “Hurt Locker” winner Kathryn Bigelow for “Zero Dark Thirty” and Ben Affleck for “Argo,” both of whom were considered Spielberg’s greatest threats. Now no one in the field has much chance at unseating him unless there’s a huge groundswell of support for “Pi.”
Prediction: Spielberg, whose “Lincoln” is nowhere as potent as his other Oscar winners “Schindler’s List” or “Saving Private Ryan.”
Preference: A non-nominated Affleck.

The best films not to make the cut were the wonderful “The Perks of Being a Wallflower” and the goofy “Moonrise Kingdom.” “Skyfall” also didn’t make the list. Other than that, it’s an impressive field – and it’s great to see “Beasts” remembered. Of the nominees, “Argo” and “Zero Dark Thirty” took hits when their respective directors were not nominated. “Playbook” is a comedy that feels a little out of place here, and “Pi” and “Les Mis” have fans and detractors. “Lincoln” – with excellent reviews and box office – seems safe – zzzzzzzzzz.
Prediction: “Lincoln”
Preference: “Argo”