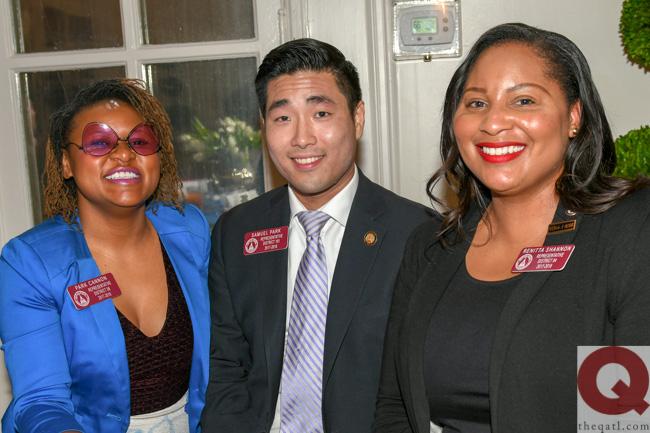 The four openly LGBTQ lawmakers in the Georgia House are running for re-election, but two of them – Reps. Park Cannon and Sam Park – face opponents and Park is being targeted by Republicans who want to unseat the first-term lawmaker.

All four Democrats – Cannon, Park and Reps. Karla Drenner and Renitta Shannon – qualified to run for another term earlier this month. But Cannon faces opposition in the Democratic primary and Park is being challenged by the anti-LGBT Republican he unseated in 2016.

“I'm going to be their top target for the Gwinnett GOP. They're going to fight hard to get back their seat because I stole the jewel of Gwinnett County,” said Park, who made history in 2016 by becoming the first Korean-American and gay man to win election to the Georgia House. Park represents District 101, which includes Lawrenceville.

“I'm still running on the same things that I originally ran on – to make sure all Georgians have access to healthcare, that every Georgian can live with equal dignity and respect without being discriminated against, that we start having a people powered economy where the state is not investing in big companies but in the people in Georgia in terms of health care, in terms of education, in terms of the type of business-friendly environment for small businesses,” Park added.

Park faces Valerie Clark in the November general election. Park scored an upset win against the then-incumbent lawmaker two years ago and won by little more than 400 votes. Clark outraised Park in the race and campaigned on her legislative record, which included voting for a controversial anti-LGBT “religious freedom” bill in 2016.

Cannon, who won a special election for the District 58 seat in 2016, did not face any opponents when she ran for her first full term later that year. But in May, she's running against Bonnie Clark in the Democratic primary.

“I've been so thankful to have the opportunity to be asked again by the constituents and residents of District 58 to continue serving as their state representative,” Cannon said.

There's no time like now for me to continue working towards progress in the state House,” Cannon added.

Shannon, a first-term lawmaker from District 84 in Decatur, came out as bisexual in October. Her campaign this year for a second term is her first since publicly identifying as LGBTQ.

“This first term has been really exciting and I really appreciate the opportunity to fight for my constituents. And so I'm excited to qualify for another term,” Shannon said.

“I don't have opposition. But you know obviously I'm still going to work hard to make sure that I reach out to my constituents during the campaign season so that I can reach all the folks I didn't reach initially to get elected,” she added.

Drenner, who was first elected to the House in 2000, is running for her 10th term. Like in 2016, she faces no opposition for the District 85 post, which includes Avondale Estates.

The four LGBT lawmakers in the state House continue to battle against “religious freedom” legislation and other anti-gay bills, while also trying to lobby for LGBT-inclusive legislation.

Park said it's critical for other lawmakers at the State Capitol to see and hear from LGBTQ colleagues.

“One of the maybe good, surprising things that I've kind of come across is that you know being in the legislature working with Republican leaders, just folks from the other side, you can change their perspective and their opinion on issues simply by being there, by breaking stereotypes, by breaking preconceived notions, by demonstrating that you are also working because you care about the state, you care about the people you represent,” Park said.

“That begins to shift the conversation. And I was very happily surprised to see how receptive and how open-minded a lot of folks in the legislature were in terms of the potential progress that we can make,” he added.

Cannon has fueled an onslaught of progressive legislation, including proposals that would eliminate the gay panic defense in manslaughter cases, launch a PrEP pilot program, improve HIV education, and ban discrimination against LGBT people in public accommodations and state jobs. Cannon also sponsored resolutions commending Pride School Atlanta and Edith Biggers, a lesbian and public health physician with the Ryan White Clinic of the Fulton County health department. Cannon also co-sponsored resolutions from Drenner commending Anne Barr, a lesbian who founded the Decatur Women's Sports League and recently retired, and the City of East Point for its “diversity and commitment to inclusion.”

“We were able to push back on the “religious freedom” conversations that were taking place in economically disadvantaging Georgia and now we're able to work on other progressive issues,” Cannon said.

Having LQBT lawmakers is critical – both to help fight legislation targeting LGBT people and to provide an example for others to see, according to out former Houston mayor and current Victory Fund CEO Annise Parker.

“You know what it would have been like in this last legislative session if those voices hadn't been there,” Parker said during a stop in Atlanta on Sunday. “We can't afford not to keep moving people into the pipeline.”

“There are young people that can look up to Sam Park and Park Cannon and Renitta Shannon and Karla Drenner,” Parker added.

Victory Fund has already endorsed Cannon and Park, and highlighted the lawmakers during its Bubbles & Biscuits brunch on Sunday. Parker also pointed to Park, Cannon and Shannon to highlight the diversification of LGBTQ candidates.

Cannon and Shannon said LGBT people outside their districts can still help them and other LGBT candidates.

“Please send me your issues even if you don't live in Georgia, send me what issues you feel like are bubbling up in our community because I want to be a lot more proactive on our issues now that I'm out and recognizable as an advocate for our community,” Shannon said.

“What we see especially when it comes to conservatives attacking our community is that they'll start something in another state and then if it works well there, it'll travel across the country. So one of the things I'm really focused on right now is trying to foresee those attacks before they potentially make it to Georgia,” she added.

Cannon said it's important for LGBT people to share their stories of discrimination.

“We want people to continue to share their stories of circumstances at the State Capitol as LGBTQ folks with people on both sides of the aisle. I am that person who if you want to reach out and say I faced this discrimination or I had this hurtful comment or I'm thinking that we'll be able to work on this progressive issue for the LGBTQ community, I'd love for you to reach out,” Cannon said.

And Parker reminded Victory Fund supporters at the event on Sunday that these candidates need money to fund their campaigns.

“Politics is not free. Candidates depend on money and people. In your local community, you can volunteer. For someone across the country, you can write a small check. Even a $25 check multiplied a hundred times has a big impact,” Parker said.