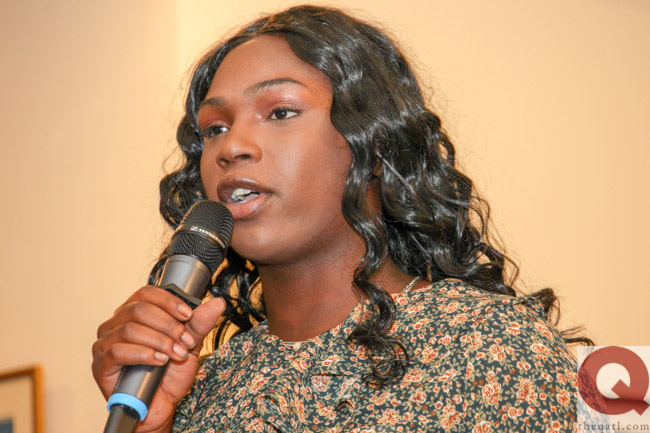 A coalition of opponents to a bill that would allow faith-based adoption and foster care agencies to refuse to serve LGBT parents and children lashed out at the legislation during a rally across from the Georgia Capitol.

A crowd of nearly 200 people crowded into the community room of Central Presbyterian Church on Thursday to hear a chorus of LGBT activists, progressive advocates, parents, an LGBT actor and a transgender teen adopted by a gay couple criticize Senate Bill 375. The legislation passed the state Senate on Friday and is now before the House.

Some 20 percent of the 14,000 children in foster care in Georgia are LGBT, Bell said. So she challenged her former colleagues in the House – where Bell served as one of the few openly LGBTQ lawmaker in the state until 2015 – to stop the legislation.

“If you're in the Georgia House of Representatives, you have an opportunity and a duty to stop this damaging piece of legislation and put the needs of children before the harm exacted upon those children based on religious exemption discrimination. I am asking them to be bold, to stand up and not suffer the little children,” Bell said.

The bill from state Sen. William Ligon, a Republican from Brunswick, would allow faith-based agencies receiving taxpayer funds to ban LGBT people from adopting children and providing foster care. State law currently allows privately funded agencies to discriminate. But critics of the legislation said it would allow the agencies to also receive taxpayer funds and write discrimination into state law.

The legislation – titled the “Keep Faith in Adoption & Foster Care Act” – has been on a fast track for approval since Ligon introduced it on Feb. 1. Lt. Gov. Casey Cagle – who presides over the Senate and is running for governor – guaranteed that senators would pass the measure.

A Senate subcommittee approved it on Feb. 8, despite concerns over its legality, and the Senate Judiciary Committee passed it with a 5-2 vote on Feb 20. On Feb. 23, the full Senate passed the bill in a 35 to 19 vote, sending the legislation to the House for consideration.

Jeff Graham, executive director of Georgia Equality, said the next few weeks in the legislature are going to be critical. The legislative session ends on March 29.

“It is morally wrong and it is wrong for the kids,” Graham said of the bill.

“Discrimination should not be a partisan issue. It is unfortunate that that's what we've devolved to in the State of Georgia today,” he added.

The most emotional comments during the rally came from Tylen Toliver (top photo), an 18-year-old transgender teen who was rejected by 30 families before being cared for by a gay couple.

For transgender children in state care, being placed with an LGBT family is critical, Toliver said.

The rally attracted a geographically diverse crowd with participants from several places outside metro Atlanta, including Macon, Columbus and St. Simons Island. But attendees were also politically diverse. Marisa Pruitt DeRossett – a self-described conservative, lesbian and mother of three children – said the bill puts her family at risk.

“S.B. 375 puts the very creation of our family at risk by allowing people's personal views, their religious views, to becomes licenses to discriminate against me and my family. As a member of the LGBT community, I am under attack. We are under attack,” DeRossett said.

Daniel Newman (second photo) – a gay Atlanta actor who is part of the “Walking Dead” cast – criticized the bill as “a total embarrassment” to the state. Newman came out against the legislation in an Instagram post on Monday, part of a growing backlash to the legislation from the film and television industries that pumped $9.5 billion into the Georgia economy last year.

“Beyond being a civil rights issue, it is an economic issue for our state. We are trying to have big companies like Amazon, Delta, UPS – huge companies and billions of dollars – coming into our city,” Newman said. “They will not be in our city and operate in our city when there is legislation that is prejudiced, that is homophobic, that is racist. It's not acceptable.”