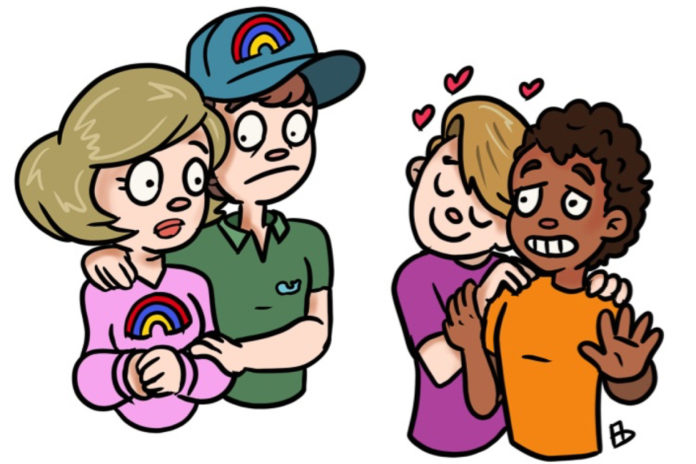 They accepted you being gay, but when you bring home a Latinx boyfriend, parents hit a snag as privileges and personal prejudices get tested.

My uber-liberal parents were always super supportive of me being gay, and even in our suburban oasis taught us about privilege and respect for all cultures and differences. I’m still shell-shocked at how those principles flew out the window when they met my Latinx boyfriend.

It never even crossed my mind that his heritage or culture, not to mention his race, would be an issue, but as soon as my mom heard he was raised in Guatemala, she visibly bristled. When they actually met, my dad heard him speak and I could tell something was up. My boyfriend is beyond fluent in English, but he still gets nervous when speaking it around strangers.

After the meeting, I got an earful. My parents believe that relationships are enough of a challenge without adding cultural differences. They told me that falling too hard for this guy was a dangerous risk to take with my future.

What they don’t know is that I’ve already fallen. We are talking about going to the next level, and now I don’t know how to deal with my parents. I know relationships are doomed if you look at the stats, and more-so with “risk factors” like incongruent backgrounds, but my heart says take the leap.

Just to put a fine point on what everyone reading your letter is thinking, the decision about who you date and fall in love with is entirely yours and not your parents. Wanting their approval is natural, especially because you haven’t had to fight for it before, but gambling your future on their opinion is a much bigger risk than mingling backgrounds with your boyfriend.

Fret not. The way things are today is not the way they’ll stay. There’s room for growth in everyone’s understanding and relationships — you with your parents and your boyfriend, and their relationships with each other.

You may be experiencing for the first time the phenomenon of an adult child knowing better than their parents. It’s an especially ironic feeling in your case, because they taught you the foundations of equality and fairness upon which you base your disagreement with them. Even the most uber-liberal people can trip over their privileges on their way to putting concepts into practice.

The good news is that, deep down, your parents know you’re right. They realize that intersectionality enriches our lives as much as it challenges us. They also know it’s your decision to make, and that if your hurdles weren’t cultural differences, they’d be something else – every relationship has them.

The hardest part may be telling them that the decision is made and open up the topic for discussion – not for them to be heard, but for you to make your intentions clear. The learning experience for you and them may take more than one conversation, and it will most likely take longer than you’d prefer, but it will be worth it.

Once the ground rules have been set, let them get to know him over time the way you did. Chances are they’ll see why you love him so much, and they’ll worry either way, but they’ll also come to respect the man they raised.