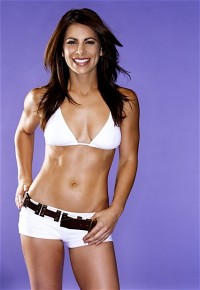 Surprisingly, the first trainer to come out as any kind of L,G, B or T on “The Biggest Loser” isn’t Bob Harper. In a cover story in the February issue of Ladies’ Home Journal, it’s Jillian Michaels who breaks the barrier.

In the yet-to-be published article, as well as an online reader Q & A, the hard-ass with heart (top photo) also openly discusses her problems with weight as a teen, her own guilty pleasures—“wine and chocolate…ah, heaven”—and her admitted Napoleon complex.

There are several random online “confirmations” that Jillian is gay that go back several years. If you simply must, do a Google search with her name and “gay.” None of the mentions is super reliable, just comments on message boards of Jillian sightings at lesbian bars, etc.

This is the first time Michaels herself has acknowledged an attraction to women and firmly put the “B” in “LGBT.” Is it a “B” on the road to admitting the “L Word”? Maybe, but it’s far more than her co-star Bob Harper has done. More on that in a minute.

Is it a shock to find out that Jillian is at least bisexual? Resoundly, no. But what really comes as no surprise is that the infamously tough, notoriously frank Michaels answers questions of such a personal nature with absolute candor.

We’d expect nothing less from the woman who inspires us to our own tears while we eat ice cream and watch her make “Biggest Loser” contestants cry, face demons and tear down internal barriers. Who better than a little dyna-MO to understand what they’re (we’re) going through? 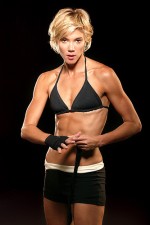 Now for a touch of pure gossip for sport. According to AfterEllen.com, Michaels has been seen cozying up to actress Vanessa Marcil from television’s “Las Vegas,” though most press coverage describes them as “best friends.”

While her delivery in the TV ads is a bit stilted, her bod is undeniably rockin’. We have to respect anyone who can put in the time, physical energy and emotional stick-to-it-iveness to accomplish that, to tape “The Biggest Loser,” and to run her own mini-empire at the same time. You rock that cottage industry, girl!

And now a quick shout out to Michaels’ co-star, the uber-sexy Bob Harper (bottom photo, with Michaels). Yes, sweet man, you are the emotional ying to Jillian’s logical yang, and we love you for it. Asking why we think you might be gay is like asking why people thought Liberace or Clay Aiken might be gay. 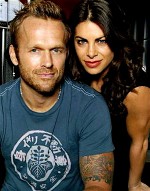 We don’t often see straight trainers exclaim, “I know that’s right!” and “We got some heroes up in this trailer!” Of course, that’s not as definitive as a clear admission on Harper’s part, or say, a sex tape, though he is featured in the “Queer Abs Workout” DVD.

So yes, Mr. Harper, we know everyone comes out in their own time, but if you have something to say, we’d like to suggest that if such an inspirational team as you and Jillian were to both come out, it would help sway the hearts and minds of middle America to the gay rights movement. Just sayin’.

Check out how a couple of former contestants—sorta, kinda, maybe—outed Harper on a radio show last year, with comments from readers of the post that say he is definitely “out” but doesn’t talk about it. Then you can draw your own conclusions.

For now, we’ll just hoist Jillian onto our collective shoulders—figuratively, because she can kick our ass—and hail her as “Biggest Loser” MVP of the week.

Season 9 of “The Biggest Loser” began Jan. 5 with the heaviest group of contestants of any season yet, including three men who outweigh the previous “largest contestant ever.” Catch Michaels and Harper in action–and the incredible contestant transformations they facilitate–each Tuesday on NBC at 8 p.m. through May’s season finale.