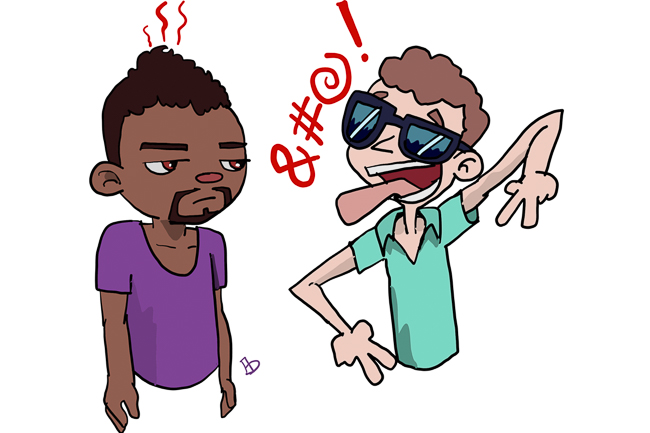 “My husband had the wind taken out of his sails. I was so angry, I walked out. Our day was hijacked by ignorant dicks.”

Within minutes of entering a gay bar in Atlanta, a young white guy we don’t know “borrowed” my sunglasses and called himself the N-word in front of my Black husband. We were taken aback, but we’re no strangers to idiots in bars or racism within the queer community.

My husband took my sunglasses off the guy, handed them back to me, looked back at the guy and said, “We’re done here.” When he tried to hug us and drunkenly and apologize, my husband said, “Get off me. We’re not friends.” It was way more gracious than I would have been.

Not 15 minutes later, my husband’s actual friend, a straight white guy, let slip the N-word in reference to someone else. While I pulled myself together, the straight guy then called the little gay who first said the N-word a “faggot.”

My husband had the wind taken out of his sails. I was so angry, I walked out. Our day was hijacked by ignorant dicks who claim to be allies.

What would you say about how to handle these incidents, and what we might do to move past them.

It’s a lot to unpack, but let’s try to at least open the suitcase even if we can’t put everything away in one sitting.

Kudos to your husband. His lifetime of experience allowed him to remain calm and defuse the first instance without tolerating the affront. In the second instance, it’s hard to imagine his pain when even more racist rhetoric, with a side order of homophobic terminology, came from a supposed friend.

Your emotions were understandably on high. You’re naturally sensitive to slights against your loved one and in defense of common decency. You couldn’t do so with a cool head, so it’s better to walk away rather than escalate.

Both of you avoided making things worse in the moment, but the disappointment lasts. It’s hard to reconcile that some people still think this behavior is OK, and it’s disgusting that we still need to say that those words are never, ever (ever-ever!) OK in the mouths of people outside the community that they reference.

Karma and justice had a hand when the N-word guy caught the F-word just as flippantly and so soon. It serves as a reminder why it’s particularly ironic and sad when members of one marginalized group show bias against another: We should know too well how it feels and why it’s wrong.

Healing is in the long game — increasing our understanding, then spreading it where we can. Here are just a few things that people of privilege can do to help fight bigotry against allied groups.

Check your privileges and prejudices. Recognize your allowances and opportunities, and scan for your own wrongheaded assumptions.

Speak up when you can in instances of discrimination in action and let everyone else know you aren’t OK with it.

Learn to challenge instances of racism in productive, defusing ways.

Remember it’s not about you, and don’t congratulate yourself for doing the right thing.