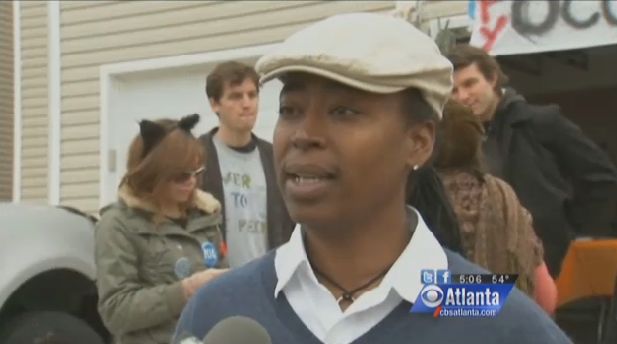 Here’s a match made in foreclosure hell. Lesbian veteran Brigitte Walker was weeks away from losing her Riverdale home to foreclosure. Occupy Atlanta was changing tack after being booted from an Atlanta park. Both despised the megabank holding her house note.

Walker (photo), who served in the Iraq war, shares the two-story home with her girlfriend and her two children. She reached out to Occupy Atlanta in early December, weeks after the group was ejected from its tent city in Woodruff Park, as it was changing course to combat metro Atlanta’s burgeoning foreclosure business.

So on Dec. 6, Occupy Atlanta occupied Walker’s home. More specifically, her yard and held meetings in the garage. The ensuing media attention prompted mortgage holder JPMorgan Chase to return to discussions with Walker about a loan modification. Walker had been trying for months to cut a deal with Chase, but was unhappy with the terms they offered.

“[Occupy Atlanta] got everyday people like myself involved. Everyday people contacting Chase and advocating for me, peaceful demonstrations, people calling and writing in,” Walker says in a prepared statement. “I feel a lot of stress is off me now. I feel like now we can celebrate the holidays.”

For its part, Occupy Atlanta scored a much needed win for the fledgling movement.

“Her story is compelling,” Occupy Atlanta organizer and spokesperson Tim Franzen tells Huffington Post. “I think that’s one of the things that drew us to her home — just very clear injustice on a woman who had literally been injured in one of our wars and suffered legitimate hardship. When Chase suffered their hardship, they were just given all this money.”

One down and 12,327 more to go. That was the number of homes in foreclosure across Georgia last month.