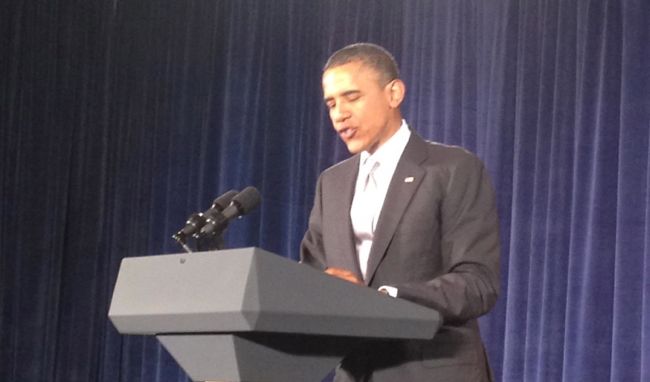 President Obama got a big dose of gay Atlanta during his campaign stop on Tuesday, from a gay pastor to moneyed activists and LGBT publishers. No word whether they shared one of those gay Oreos. Before Air Force One’s wheels hit the runway at Hartsfield-Jackson, we told you that at least one LGBT politico was preparing to meet POTUS on Tuesday. Turns out, that was just the tip of the rainbow-colored iceberg. A handful of Atlanta’s LGBTs sat for a 30-minute briefing before Obama’s speech downtown, including Glen Paul Freedman who chairs the Atlanta Pride Committee and LGBT advisory board for the Atlanta Police Department. He posted his reaction to Facebook:

This was the coolest thing ever. Got to meet President Obama take a picture with him, sake his hand and say a few words. I am in heaven.

Josh Noblitt, a pastor at Saint Mark United Methodist Church, posted photos from the event. Paul Horning, a board member of the Gay & Lesbian Victory Fund was on hand, too. Former radio host Melissa Carter created a Flickr gallery of photos during her time at the event. Thomas Ryan-Lawrence, CFO at Carma Productions, and his partner Chris got an up close and personal look at Obama.

We were 15 feet away from President Obama for the entire speech!!!

Ryan-Lawrence got a handshake from Obama, too. Marci Alt, Carma’s owner, attended with partner Marlysa Brooks-Alt and posted some brief analysis of Obama’s speech at the Westin Peachtree Plaza.

he did an awesome job

Did you attend Obama’s speech, get stuck in traffic thanks his motorcade or get some other glimpse? Leave a comment and post a photo. Photo courtesy Thomas Ryan-Lawrence