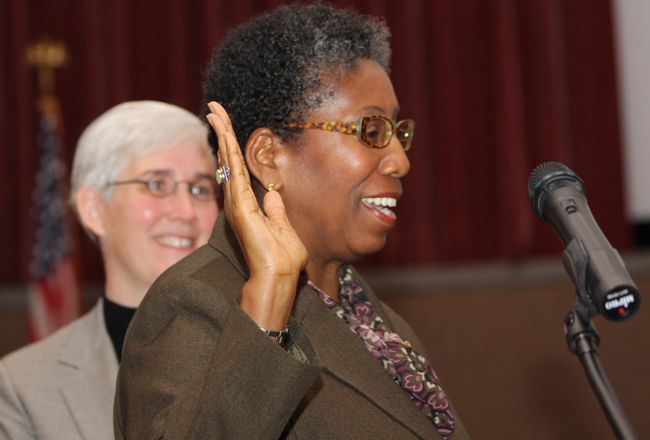 Joan Garner came full circle on Wednesday, taking her oath of office to join the Fulton County Commission and ending a lengthy transition from LGBT and community activist to political insider and now, elected official.

With partner Jane Morrison at her side, Garner was sworn into office by Fulton Superior Court Chief Judge Cynthia Wright, who is also a lesbian. Garner was one of two new elected officials taking seats on the commission during Wednesday’s inauguration and becomes the only openly gay person on the seven-member panel.

“Today is no ordinary day. While many leaders have taken the oath like this before, this is more than an average, run of the mill inaugural ceremony as you can see,” Garner said. “This inaugural ceremony for me is the realization of a life-long quest for inclusion.”

Garner is the last in a trio of gay and lesbian people to take office in Atlanta in the last year and in the process, make historic strides for openly gay elected officials. She is the first openly gay person elected to the Fulton County Commission. In January 2010, Alex Wan took office as the first openly gay man and Asian American on the Atlanta City Council. In December 2009, Simone Bell was sworn in as a state representative and became the first openly lesbian African-American elected to a state legislature in the U.S.

Garner vowed to give voice to the concerns of residents across her district and focus on health issues. She dubbed herself “the self-proclaimed health commissioner.”

“On this historic day, I pledge to represent the people of District 6 and all of Fulton County with the same energy, passion, and determination that I’ve used and pursued of my own dreams. I want to thank you all for this opportunity,” Garner said.

Garner opened her campaign last April with strong support from gay politicos who helped staff her campaign and fill its coffers. Her work on LGBT issues dates back to serving on the transition team of Mayor Maynard Jackson, who later appointed her as a senior advisor on gay and lesbian issues. That appointment was the first high-level LGBT position created by an Atlanta mayor.

Garner collected the endorsements of three key LGBT groups – Georgia Equality, Atlanta Stonewall Democrats and the national Gay & Lesbian Victory Fund – on her way to victory. That support helped boost Garner to a narrow second place finish in the a five-way Democratic primary in July. Two weeks later, she thumped lesbian and perennial candidate Keisha Waites in the runoff. Without Republican opposition in November, the primary was tantamount to winning the office.

On Wednesday, Garner joined Liz Hausmann in beginning their first terms in office. Chair John Eaves, who pushed his gay-friendly record during his re-election, started his second four-year term. Commissioner Robb Pitts, a former Atlanta City Council president, opened his third term and included gay people as he pledged “to represent all of you.”