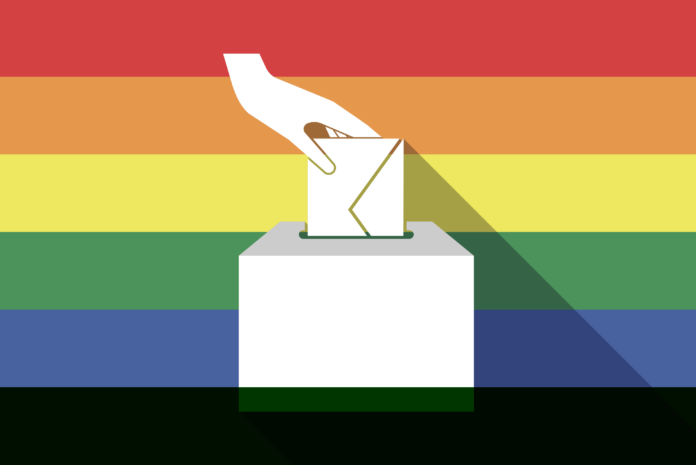 Some might say that this coming Tuesday is the most crucial day in years for queer safety, rights and survival. It’s time to flick the political pendulum back toward LGBTQ justice.

It may feel like both yesterday and a lifetime ago that the Trump tide turned that fateful November night in 2016. On Tuesday, Election Day comes as the best chance for disenfranchised voters to respond in a direct, concrete way.

Consider Nov. 3 the day that queers can shout in unison from the proverbial rooftops that we’re mad as hell and we’re not going to take it anymore. The loud declaration itself should bring some relief for road-weary souls.

If you haven’t already, vote as if local queer lives depend on it, because they do.

The reigning administration truncates our rights at every turn. Officials installed in every corner of government express interest in further limiting or eliminating equal access for LGBTQ people. The president himself openly fuels sparks of hatred and incites dissent that supports discrimination.

The past four years have been tough. With every political storm — every tweet, every flippantly bigoted comment, every official decision that hurts LGBTQ people or removes protections — there’s a feeling of “this has to be the worst of it.”

Then the realization sets in: We haven’t yet hit the eye wall of the storm. People already clinging to the edge are pushed into deeper despair. Knowing how to help or affect change often seems unclear.

Finally, after days, months and years — and the year from Hell — it’s time for us to act. To act up, to act out, to act against the erosion of LGBTQ equality in the last four years.

If voting against something or someone isn’t your style, there’s plenty to vote for as well. Vote in favor of the rights of women, for equal treatment for people of color, for equity in resources and opportunities.

And vote for your own best interests. Vote for your relationship and your individual rights. Vote for representatives who not only accept the reality of LGBTQ lives, but welcome us at their tables.

With the correct people in office, at home and in Washington, we can create a layer of protection for ourselves from very real hostile forces aimed at LGBTQ communities.

The best news is that we can win. The numbers are there. We just have to do our part. “Our part” is more than just voting, too. It’s more than posting a sermon to the choir.

Make phone calls. Have tough conversations. Tell everyone in your reach how their votes can make a difference — for better or worse. Ask people who love you to consider your safety. Then make a plan, help others make plans, and do what you need to do.

Then start daydreaming of ways to swing that pendulum further in Georgia in 2021.

Mike Fleming is editor of Q ATLus magazine and co-publisher of Project Q Atlanta. Opinions expressed are his own. Write [email protected].

You can read the full print issue online here:

Whether you’re a Hot Mess, LGBTQ organizer, queer for queens or easy for dance parties, gay Atlanta has your ticket to ride this Friday...
Read more
Nightlife