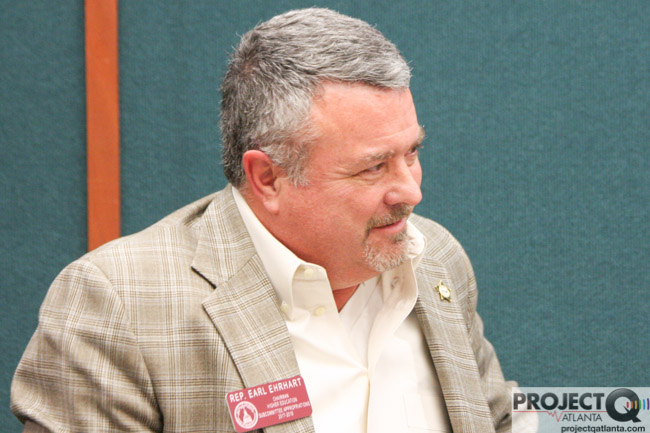 Rep. Earl Ehrhart – the longest serving Republican in the Georgia House and its most outspoken anti-LGBT member – has called it quits, announcing that he won't seek a 16th term.

Ehrhart made the announcement on Monday as candidate qualifying opened at the State Capitol. His wife, Ginny, is running to replace him in the District 36 seat. Via the AJC:

“It has been an honor and a privilege to serve my neighbors in Cobb County and the people of Georgia for the last 30 years,” Ehrhart said. “I have always tried to do what I thought was best for my constituents by building a better economy, keeping us safe, improving public education, and promoting family values.”

Ehrhart faced political headwinds if he sought to add to his 30 years in the state House. Democrat Jen Slipakoff announced last month that her campaign raised more than $62,000 and surpassed Ehrhart's fundraising.

Slipakoff's campaign was likely to shine a light on Ehrhart's long-running fight against LGBT issues. She serves as a PFLAG co-president and sits on the Atlanta Steering Committee for the Human Rights Campaign. Last June, Georgia Equality honored her with its Guiding Star Award for her work as an advocate for transgender rights.

Slipakoff's 9-year-old daughter, Allie, is transgender, something she documented in an AJC column in 2016.

I want for Allie the same thing all parents want: I want her to be treated fairly and equally under the law. I want her to know she is growing up in a community and a country that values and respects her, and recognizes her basic dignity. I want to know that as she gets older and starts venturing out with her friends to public places like malls, restaurants and movie theaters, she’ll be safe.

“Earl Ehrhart's news isn’t particularly surprising. After 30 years I don’t blame Mr. Ehrhart for wanting a break, especially amidst a changing political climate and when faced with a competent challenger,” Slipakoff said in a prepared statement.

She added that her campaign will continue to focus on equal rights and “fighting for the rights of everyone.”

“My goals for this district and my campaign remain the same no matter which Ehrhart is my opponent.  I got into this race to champion equal rights and equal pay for women, to fight for affordable healthcare for all constituents, and to work to fully fund our public schools to ensure the youngest members of our community are fully prepared to succeed. Constituents of the 36th district need a representative committed to listening to and fighting for the rights of everyone. As a civil rights advocate, I have spent years giving a voice to the voiceless and standing up to bullies. I intend to serve constituents the way I have served my various communities – with grit, dedication, and integrity,” Slipakoff added.

In 2017, Ehrhart mocked transgender people from the House floor.

In 2016, he called LGBT students at Kennesaw State University a “bigoted, intolerant hate group” and wanted to make sure a sweeping civil rights bill didn't protect transgender people. Via WABE:

Also in 2016, Ehrhart voted for an anti-LGBT “religious freedom” bill that sparked national controversy and was later vetoed by Gov. Nathan Deal.

Also that year, Ehrhart mustered outrage over the art exhibit “Art AIDS America” during its show at Kennesaw State and criticized a gay professor at the school. Via Georgia Voice:

In 2013, Ehrhart pushed for the expansion of a state program that allowed people and corporations in Georgia to divert a portion of their state taxes to scholarships for students to attend schools with anti-LGBT policies. He runs an agency that benefits from the student scholarship program and tried again in 2017 to expand the program with House Bill 217. The legislation failed to gain final passage on March 30, the last day of the legislative session.