Not just for big guns: Rock the gay tank top 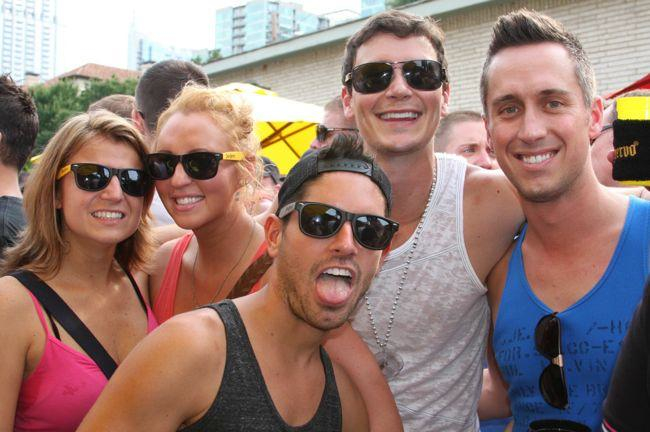 Gay men with the arms for it never really let go of the tank top as an option, but the early ‘80s must-have is back as a white-hot trend for everybody this summer, and as usual, Atlanta’s gays are all over it. Rejoice, gay men who have been waiting for this fashion reboot. At least for this year, your go-to tank is back in style. If you’re still among those who immediately thought “Jersey Shore” and gay gym bunnies when thinking tank tops, five of our eight photo galleries from last weekend’s events in the gay-TL provide the proof that tanks are back, and that gays are first on top of the trend (photo, view more select examples below). After all, who do you think brought back bow ties? But don’t take our word for it. GQ said “Wear It Now” on June 2. Designers from American Apparel to Dries Van Noten are cranking out versions in vivid colors and graphic patterns in tailored fits that show off even skinny frames. Unlike their beach-bound predecessors – the term “tank top” was coined in the ‘20s as the top half of the modest “tank suits” worn at the swimming tank, these days called swimming pools – the 2012 versions are going all sorts of places, from cookouts to parties, gallery openings to bar nights. Apparently the London Olympics will be swarming with tanks on fans and athletes alike (Brits call them “vests,” FYI). But let’s be clear: We’re not talking cheap “wife beaters” that show us how rough and tumble you are. Like your favorite t-shirt, the new sporty fashion reboot can be paired with shorts and trunks to be sure, but with jeans, khakis and even blazers, too. Stick arms and bitch titties? They aren't a hindrance for those eager to be up to the minute. So taken with a grain of Coco Chanel’s astute advice that “just because it’s in doesn’t mean you should be in it,” take a look at ways that Atlanta’s gay men are rocking the tank top this summer. Photos by Randall Carpenter, Sher Pruitt and Project Q Atlanta