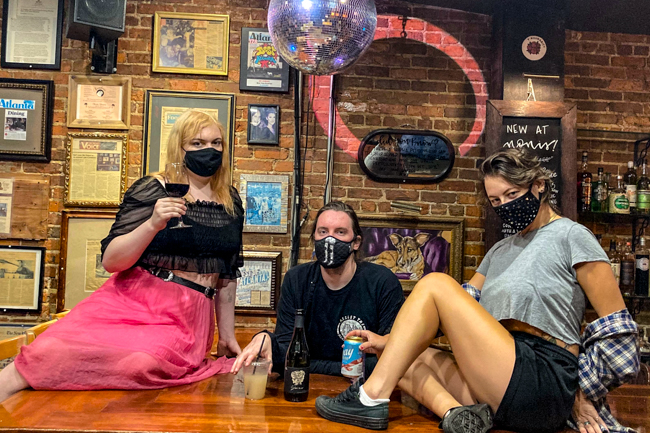 “Honey, we are dyyyyinggggg to open our doors wide open and have a dance party again, but we aren’t even close to that yet,” said Ryan Buchanan, general manager of Noni’s.

That said, the business they do have at the LGBTQ and allied Edgewood bar and deli is safer thanks entirely to the tenacity of the staff, up to and including standing up to management at one point, Buchanan told Project Q.

Early in the coronavirus pandemic, the course for Noni’s was as clear as it was devastating to business, he said, and the reality was not pretty.

“We knew the only way to stay healthy in the first couple months was to remain completely closed, no take out, no delivery, c – l – o – s – e – d,” he remembered. “Thankfully, our owner applied early and as soon as possible for every single loan, grant, exemption, Pizza Hut personal pan pizza coupon, whatever that became available.”

Management immediately made jumping through unemployment hoops a top priority, and figuring out everything for themselves became a fulltime job for the bosses, Buchanan said. Noni’s staff “got off easier than most with dealing with the shit show that is Georgia’s Department of Labor,” he added.

“We quickly had to become [unemployment] experts and dedicate every waking moment to making sure each of us had food, money for rent, and most importantly – not getting sick,” he said. “It was fucking traumatic. …It was a struggle and kinda still is.”

By May, with state guidelines for reopening in hand, tentative plans came together for dine-in service, but it wasn’t enough for the staff. Buchanan said that he and Owner Matt Ruppert were grateful for their feedback, since after some thought they realized that Gov. Brian Kemp’s restrictions on restaurants and bars were irresponsible and inadequate.

“Thankfully, our staff actually came together, outside of management, and essentially unionized our asses,” he said, half-joking. “By utilizing their collective power, they created a list of demands that went against the unjust pressure to put themselves at risk. This was inspiring, and these demands became the underpinnings of our current operating structure.”

Buchanan said he worries about food service industry employees who are in unsafe situations and don’t work for bosses willing to listen and pivot. He recommended @ShiftChangeATL on Instagram as a starting place for anyone who feels ignored by management.

“Businesses need to realize we only exist because of the labor of our workers, and their safety and livelihood is the only priority we should have,” he asserted. “We will only move forward and adjust our reopening phases as our entire staff collectively feel safe.”

With staff feedback, Noni’s management went back to the drawing board. This time, they came out with better guidelines, including a list of expanded guidelines created by Old Fourth Ward Business Alliance members. 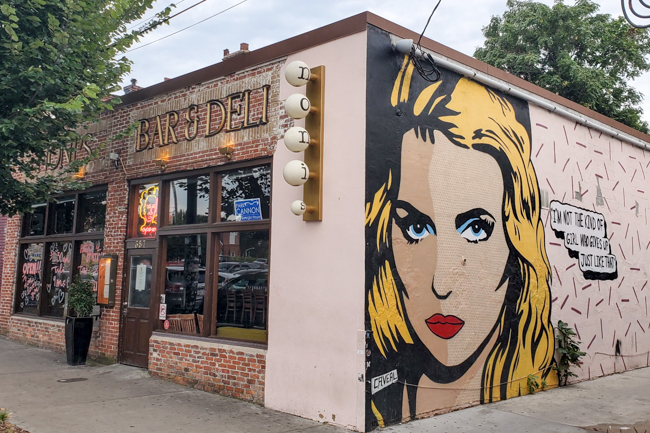 In addition, Noni’s staff quarantined together in order to resume takeout service. The setup was a blessing and a challenge, Buchanan remembered.

“Luckily we actually love each other’s company and were able to form small, safe and responsible isolation cells, plus with our large an available selection of booze helped a lot,” he said.

These days, Noni’s exceeds state guidelines to ensure the safety of its employees and patrons. The popular eatery and bar is still predominantly take-out with some outdoor seating available for a picnic vibe.

Morale is higher than it was in the spring, but a lack of certainty is still tough for everyone at Noni’s, Buchanan said.

“To be honest, keeping our spirits up is a daily struggle because there is no certainty to any kind of economic security in the future of our industry,” he said. “All we can do is try to serve safely and make sure no one has a chance of spreading and catching this invisible monster.”

Noni’s will consider dine-in service when Mayor Keisha Lance Bottoms moves the city to phase three of its reopening schedule. (Bottoms shifted to phase two earlier this month.) In the meantime, they are considering a COVID Era version of the drag show Misc. Edgewood.

Until then, customers can help by patronizing Noni’s under its new normal.

“Come to our back patio, order online or in person for food, cocktails, wine, fernet or even a Noni’s T-Shirt,” Buchanan said.

What else can the LGBTQ-ATL be doing in the meantime? That’s easy: Stay abreast of the bigger picture and get involved, Buchanan said.

“Black trans lives still matter. Ask yourself what are you doing today to be anti-racist? Join SNaP4freedom. You can easily donate time or money to help effective on-the-ground work to protect our community,” he said.

Noni’s Deli is at 357 Edgewood Ave., SE. Visit nonisdeli.com to order or look for them on your favorite food delivery app. Photos courtesy Noni’s.

With fingers in pies across LGBTQ Atlanta, Juan and Gee Smalls are predictable in only one way: unpredictability. Earlier this month, the event planners-cum-fundraisers-cum-creators-cum-restauranteurs grabbed...
Read more
Community

‘Thicc b*tch’ loves himself through ‘Too Large’

What started as a dream for one trans woman out to make life better for underserved trans Atlantans hit two major milestones so far...
Read more