Nominate your faves in Fenuxe’s ‘Best Of’ poll

Does the gay dollar have power in the Movement? And in Atlanta, what businesses are the best of the best? The guys at Fenuxe magazine want to know and are seeking nominations in the first Fenuxe Best Of Atlanta poll.

From autos to art, beauty to the bar scene, food to furniture and pets to places, commerce is power, says William Duffee-Braun (photo, left), editor and co-owner of Fenuxe with his partner Tyler Calkins (right).

“Since day one, Tyler and I have believed that positive changes can be made through commerce,” Duffee-Braun says. “If you spend your dollars in gay and gay-friendly businesses, you support the community and add strength to the community.”

And of course, when the gay glossy reports the findings in its July 28 edition, it’s a chance to find out which of the businesses that get your dollars actually support you back. The magazine will celebrate its Best of Atlanta issue with a party at By Design Furniture on the day the issue hits the stands.

“We’re very excited about it,” Duffee-Braun says. “There is so much diversity in this community, and it’s been fun to read people’s responses and see the diversity of the nominations we’ve gotten so far. It’ll be really interesting to see what happens when voting opens on June 30.” 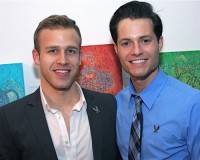 That’s right. Online nominations are open now and close on Wednesday, June 29. Those that get the most nods will become finalists in the voting phase that begins the very next day. And yes, you can vote for best LGBT News Outlet in the Community section. And yes, we won’t mind a bit if you type in “Project Q Atlanta.” As they say, vote early and vote often for all your favorites.

And don’t be surprised to find no People categories in the Fenuxe Best of Atlanta poll. The magazine saves that for its Fenuxe 50 issue in November, when it fetes the Gay-TL’s movers and shakers in their very own special issue for the second year. Check out a few of last year’s winners in our report and photo gallery from the 2010 Fenuxe 50 party.

Speaking of reader polls, voting in the GA Voice’s Best of Atlanta is in its final throws to determine winners in a broad spectrum of who, what and where its readers think are the “Best.” Voting in that contest closes on Sunday, June 26. We already asserted who loves ya and shamelessly seek your vote as a finalist in the Best LGBT Blog/Website category.

Get to clicking in both polls as we all all await the dramatic results and reveals in every category.