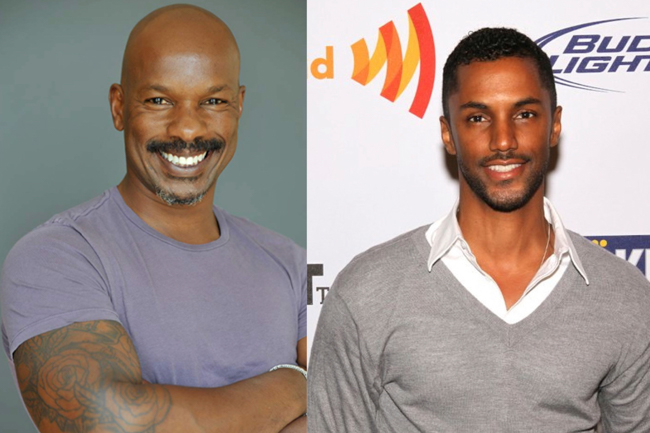 Doug Spearman's new film with actor Darryl Stephens, From Zero to I Love You completes a 20-plus year journey to the screen when it plays the Out on Film festival on Sept. 27.

The romantic drama stars Stephens as Pete, a gay man with a history of getting involved with married men. Pete’s father and soon-to-be stepmother want him to find someone who’s available and settle down. Then Pete meets Jack (Scott Bailey), the father of two children who’s 15 years into the “perfect” marriage — to a woman.

Spearman starred alongside Stephens in Noah’s Arc, the seminal TV series about the lives of black gay men. But Stephens wasn’t the first one cast. When Spearman started trying to produce the film in 1998, he was going to play the role of Pete himself.

“Then I just got too old to play Pete,” Spearman tells Q. “Darryl and I had been friends before Noah’s Arc, then I cast him as the bad guy in [Spearman’s debut feature film] Hot Guys with Guns. I wanted to find someone with the layers of Pete because he’s a pretty complicated guy.”

Spearman identified with the character because he used to be Pete.

“From the time I was a teenager, I found myself the object of attraction for older married guys,” he says. “It was college professors, the fathers of kids I went to school with — that was awkward. And I got tired of it just happening on repeat all the time. There was always a third in our relationship.”

Spearman later wrote a novel called Welcome, Sinners that was “basically Jack and Pete’s story,” he says. It was developed into a film with the same name, but a couple of the distributors objected to the title.

“They didn’t think a gay story with the word ‘sinner’ in the title was going to be helping anybody,” Spearman says. “I was fine, I could understand it.”

Spearman made Jack’s character white in part to inspire conversation.

From Zero to I Love You premiered at BFI Flare, an LGBTQ film festival in London, and it’s since screened at Inside Out in Toronto, Qflix in Philadelphia and the Tampa International Gay & Lesbian Film Festival. It appears at Out on Film at a screening co-sponsored by Q magazine and Project Q, alongside In The Life Atlanta.

It’s taken a while to get here for Spearman, who says he put his heart, soul and possessions toward the film’s completion.

“The cost of the film was more than money,” he says. “I put my car into it, a house and an apartment and even a relationship.

“All of that paid off in spades when I get to talk to people after the screening and there are dozens and dozens of guys who come up to me and tell me their story,” he continues, “how it clearly represents something they went through, and they’re very grateful to have it on screen.”

From Zero to I Love You screens on Sept. 27 at 9 p.m. at Landmark Midtown Art Cinema as part of the 32nd Annual Out on Film festival, outonfilm.org