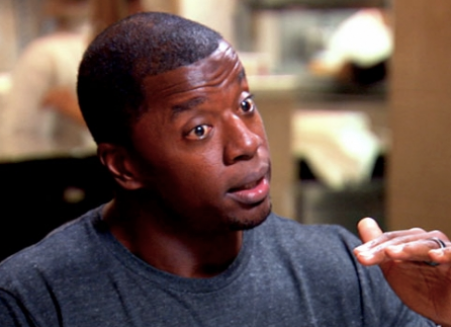 What’s the best way to put those gay rumors to rest? If you’re ex-NFL, ex “Real Housewives of Atlanta” hubby Kordell Stewart, protest too much and disparage gay men.

Unable to shake gay rumors for years even after he married “Housewives” honey Porsha, Stewart (above) took a break from his job on sports station 92.9 The Game on Tuesday. For his latest coming out as straight, he hit V103 instead to react to the Season 6 premiere of the Bravo show in which his ex trudges up rumors she once denied for him.

It’s just Kordell’s latest attempt to quiet gay rumors by lending them public lip service. Not the kind of lip service he allegedly paid a cross-dressing prostitute in a Pittsburgh park while on the Steelers.

Then he added, almost as an afterthought: “All due respect.” It's nice of him to throw that in there, because we do feel more than a little disrespected by the implication that any gay man is not “100 percent man.”

And you’re not alone: No one knows what he meant by “I don’t do no homophobic.” Not to be outdone, morning show host Ryan Cameron gets down in the dirt with Kordell to dish “backdoor” jokes about gay people. Watch the video below or view the whole two-part interview here and here.

We don’t think “RHOA” will ever top faggot-gate – or we hope not – but just put this latest stuny on the list of “RHOA” mining the gay for a little media buzz or just to build the divas' personal brands during off-season downtime. Then again, we don't put anything past them.