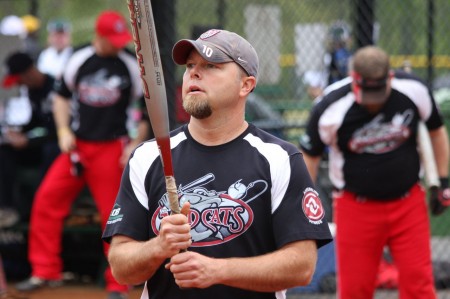 Nearly 130 teams from across the country converged on Milwaukee over the weekend to kick off the Gay Softball World Series. Among those competing are nine teams from the Hotlanta Softball League’s Open Division (men), hoping for a shot at the title in one of four classifications.

The tournament, staged each year by the North American Gay Amateur Athletic Alliance, opened pool play on Monday for the B,C and D divisions, with double-elimination games beginning Wednesday. The A division, the most competitive, opens play on Wednesday. Teams — including Atlanta Avengers A, Atlanta Sluggers, Atlanta Venom and Georgia Mudcats A in A; Sharks in B; Atlanta Avengers C and Woofs Pounders in C; and Atlanta Avengers D and Mudcats D in D — are hoping to still be on the field Saturday for the championship round.

The Sharks, competing against 26 other teams in the B division, went from worst to first during the regular season to capture a berth to the World Series, it’s first trip in the B classification. The last time the team enjoyed post-season play — 2004 — it also went from worst to first. Sharks coach Ken Deleon says the team is playing for teammate Clint Price, who died Aug. 11.

“We pride ourselves in not just being a small, quick and scrappy team but a real family,” Deleon says.

The tournament bills itself as the largest annual gay sporting event in the world. Consider this: If each team carries 15 players and 10 partners or fans, that’s more than 3,200 gay men and women. Tournament officials anticipate between 4,000 to 5,000 fans during the week.

But the World Series isn’t just about the softball — there’s a full slate of events during the week, including a talent show fundraiser (hosted by Atlanta’s own Bubba D. Licious), street bash, live entertainment and a host of nightlife options.

I’m going to do my best to represent at each event and bar. I just hope there’s plenty of those 5-hour energy shots available. The rest of my reports will be more about the events, the games and the gossip.

Oops, did I say gossip? While we’re all saying “what happens in Milwaukee, stays in Milwaukee,” don’t count on it. I hope to include team and player profiles and keep all HSL fans who couldn’t make it to the GSWS current with the news.