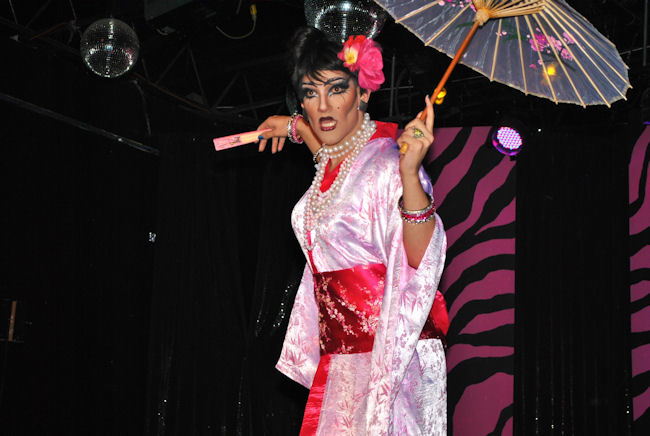 Another week, another “RuPaul’s Drag Race” alum in gay Atlanta. But this time was extra special. Really. Season 1 finalist Nina Flowers brought her magic to stage and the judge’s table at Jungle on Wednesday for opening night of the fierce Dragnificent competition.

There’s no drag show like a contest where someone gets the axe. Dragnificent delivered that kind of just-for-fun drama. Show organizer Phoenix and local fave Edie Cheezburger – who gave the contestants her five secrets to success as a past winner – welcomed Flowers to the judging table, and Nicole Paige Brooks played emcee. This was more than a night of open auditions, after all.

A huge crowd was on hand for the contest’s debut, which followed another packed, fun edition of the monthly Big Gay Game Show (view photos).

The open-ended first-week challenge asked the queens to show who they are as performers, and Evah Destruction (top photo) won the night. Tanyla Santi Cassadine looked fierce, but when all was dragged and done, she became the first contestant to get the boot.

Next week, the remaining contestants take on the Broadway challenge before another competitor is sent packing.