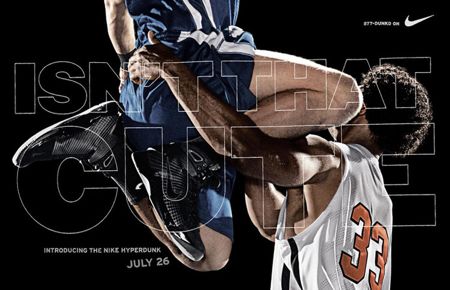 Some gay bloggers (and activists) huffed and puffed and Nike backed down. A portion of its Hypderdunk campaign is no more.

On Friday, the company dropped three print and billboard pieces of the campaign, a move coming just days after intense criticism and charges of homophobia surfaced on several gay blogs. The six new spots from Wieden & Kennedy include variations on two basketball players with one getting a face full of crotch as the other jumps past him. Taglines include “Say Hello,” “That Ain’t Right,” “Now You Know,” “Isn’t That Cute, “Punks Jump Up” and “Fly.”

Nike’s three-paragraph statement on the PR mess includes this:

However, after listening to concerns expressed around specific executions, we have decided to drop them from the campaign to underline our ongoing commitment to supporting diversity in sport and the workplace.

Also, Wieden & Kennedy — which defended the ads earlier this week in a post titled “Hypersensitive Y’all?” – pulled three of the ads from its web site later in the week. Gone are “That Ain’t Right,” “Isn’t That Cute and “Punks Jump Up.” Overreaching scored a slam-dunk this week.