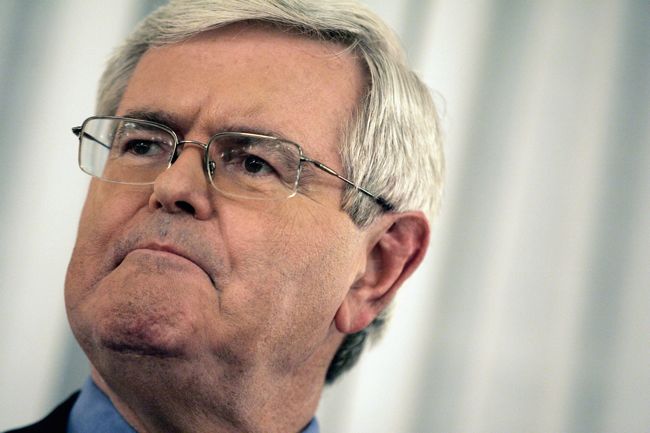 Newt Gingrich, Georgia’s own divorce expert and professor of anti-gay extremism, is updating his syllabus. Sort of. He now accepts “the reality” of gay marriage though not quite supporting LGBT folks, like his half sister, actually getting gay hitched. That’s a surprising evolution, given that Gingrich helped pass the federal gay marriage ban called the Defense of Marriage Act and rode his anti-gay express through the GOP presidential primary earlier this year. But hey, elected officials evolve. Gingrich’s quip came during a Huffington Post interview in which he offered up enough of his usual braggadocio to choke a horse.

On gay marriage, meanwhile, Gingrich argued that Republicans could no longer close their eyes to the course of public opinion. While he continued to profess a belief that marriage is defined as being between a man and a woman, he suggested that the party (and he himself) could accept a distinction between a "marriage in a church from a legal document issued by the state" -- the latter being acceptable. "I think that this will be much more difficult than immigration for conservatism to come to grips with," he said, noting that the debate's dynamics had changed after state referenda began resulting in the legalization of same-sex marriage. "It is in every family. It is in every community. The momentum is clearly now in the direction in finding some way to ... accommodate and deal with reality. And the reality is going to be that in a number of American states -- and it will be more after 2014 -- gay relationships will be legal, period."

So there you go. Gay marriage is inevitable, but marriage still should be that one man, one woman thing. Even if done repeatedly like the thrice-married Gingrich has over the years. Once conservative allies pounced on Gingrich’s marriage shift, even in the face of what marriage equality activists hope is the addition of seven more states that could see gay marriage in 2013. Gingrich, though, then offers up this snippet that so ignores his personal history that it’s laughable.

Stepping back from the political, Gingrich noted that he has a personal stake in the gay marriage debate. His half-sister works at the Human Rights Campaign. He has gay friends who've gotten married in Iowa. The man who once compared same-sex marriage to paganism is now worried that the Republican Party could find itself trapped in a bygone era on the matter. "I didn't think that was inevitable 10 or 15 years ago, when we passed the Defense of Marriage Act," he said. "It didn't seem at the time to be anything like as big a wave of change as we are now seeing."

That half-sister and HRC employee is Gingrich apologist Candace. But when she married her partner in Kentucky three years ago, older bro Gingrich skipped it for a safari in Africa. Those gay friends who married in Iowa? Gingrich campaigned to have three of the judges who OK’d marriage equality in Iowa thrown off the bench. And he was successful. So there you go. Gingrich supports the reality of gay marriage. Again. At least until he doesn’t. Photo by Mike Segar/Reuters via Salon