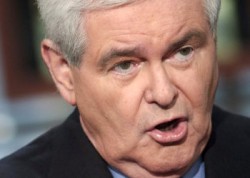 If you’d like to see the face of Georgia’s leading marriage bigots, look no further than a high dollar fundraiser Wednesday in Atlanta for the state’s long-lost conservative marriage whore, Newt Gingrich.

The pol – once from Georgia before becoming a bloated piece of the Washington, D.C. establishment before flirting again with running for president and renewing his Georgia vows – is in town for a $1,000-a-plate fundraiser to feed his run for the White House. No doubt he’ll make the trip with his wife – ahem, his third wife – to have a little help in hauling the cash back to his headquarters.

Gingrich (photo) hit Atlanta in early March to tease the assemblage of national media, who expected him to announce his presidential run. Instead, he said he’s exploring the bid.

Despite his failed marriages and extramarital affairs, Gingrich finds time and the oratorical balls to rail against same-sex marriage. He whined about it during a stop at UGA in 2009; he criticized President Obama earlier this year for refusing to defend the federal Defense of Marriage Act in court.

On hand at the Wednesday fundraiser to kiss his ring: Current Gov. Nathan Deal, the one who ran one of the most anti-gay campaigns in state history, and former governors Sonny Perdue and Zell Miller. Never one to miss the chance to zing, Miller has done so when it comes to same-sex marriage. Take a 2004 appearance before the state’s Christian Coalition chapter. Yeah, you can imagine how that speech went.