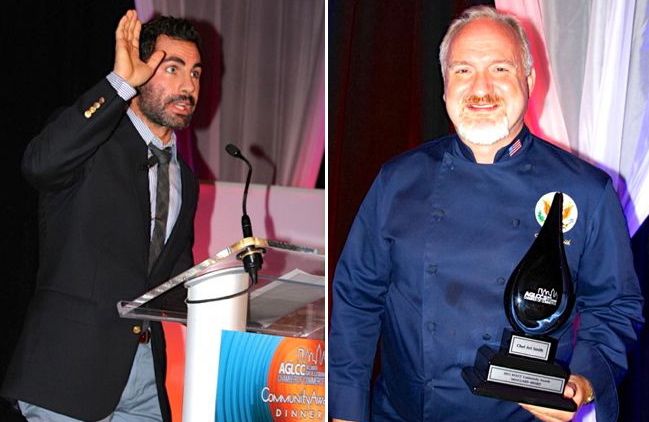 It unfolded on Twitter as Rudat prepared to emcee the Community Awards Dinner (view gallery) from the Atlanta Gay & Lesbian Chamber of Commerce on Friday. Smith (photo right) started things on Wednesday, as the former personal chef to Oprah and current restaurateur landed in Atlanta for a host of events and to pick up an AGLCC award. He tweeted to Rudat (left).

But oops, someone didn't tell the chef that Rudat got canned just like gay weather guy Cris Martinez. But hey, consolation prize: An invitation to the anniversary party of Smith and Jesus Saguaro at Smith's Atlanta restaurant Southern Art. The pair got hitched in 2010 after taking their 485 guests on a four-mile run through Washington, D.C. Seriously.

And then back to the bromance.

But by Friday, the bromance was heating up again.

Then Smith showed he knows how to work a bromance. Rudat, a graffiti artist, donated a piece of his work to the AGLCC event's silent auction. Smith picked it up. Rudat was flush with appreciation.

Better act fast on this bromance, though. Rudat heads to Palm Springs after Labor Day. And he's dishing out some motivational talk, too.