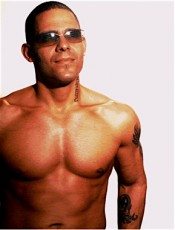 The economy continues to take a toll on metro Atlanta gay bars. As rumors swirl around 3 Legged Cowboy, the Bodyshop calls it quits Saturday with DJ Lydia Prim, and New Year’s is the last night for the Stage Door.

“Thanks for three great years, Atlanta. We’ll miss you” is the tagline for closing weekend invitations at DeKalb’s after-hours mecca the Bodyshop.

True to its reputation for booking big-name DJs and securing close relationships with local gay party promoters, the club takes its bow in style with three nights of wee-hours dance beats.

As we mentioned in our Gay Guide to New Year’s Eve, mega-hunk and megawatt DJ Eddie Baez (top photo) does the second set of his nine-hour Double Header at the Bodyshop on New Year’s morning. Doors open at 1 a.m., and the party gets pumping officially at 2:30 a.m. Baez opens at the Heretic at 10 p.m., and in case you were worried, Bodyshop owner Alan Collins will remain the General Manager of the Heretic. 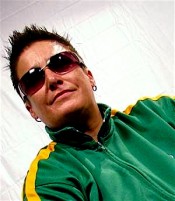 The Bodyshop opens the same hours for DJ Rick Walsh on Friday, New Year’s Day, and the next night, when powerhouse lesbian DJ Lydia Prim (bottom photo) closes out the venue with the “Last Dance” party on Saturday night/Sunday morning.

Another gay bar outside the inner city is also closing. Owner Bryen Noel says the Stage Door’s last Premier Thursday show at his suburban Tucker bar on New Year’s Eve boils down to the economy and his own exhaustion.

Not that he didn’t have some loyal customers. The idea to open a friendly, neighborhood haunt in Tucker so that gay and lesbian suburbanites didn’t have to truck into Midtown was a sight for many a sore eye on the eastern edge of the I-285 Perimeter.

A full menu, weekly shows and game nights, as well as special events made the Stage Door the perfect destination for a beer or a whole night out that wasn’t too far from home.

“It’s sad, but I didn’t have another choice,” he says.

Meanwhile, back in Midtown, we are fielding questions and trying to get to the bottom of rumors that Atlanta’s gay country bar, 3 Legged Cowboy, is facing the same fate as the Bodyshop and the Stage Door. A reader tip led to five phone calls about the possibility that the bar will soon turn off the lights and bolt the doors.

The apparently jinxed spot in the Midtown Promenade shopping center, which saw a year of big drama after the venerable Hoedown’s was sold and the new owner was subsequently run out of town, may or may not be doomed for another closure.

Three people with close associations with 3 Legged Cowboy would neither confirm nor deny the rumors that the bar is closing; the other two declined any comment at all. Deanna Collins, the original longtime Hoedown’s owner who saved the Midtown Promenade spot as a venue for LGBT country fans by renaming it 3 Legged Cowboy, was not immediately available for comment on Thursday.

Since Project Q Atlanta could not gain us an answer “from the horse’s mouth,” we can only promise to keep you posted on the situation as soon as we reach Collins or another irrefutable source.

The 3 Legged Cowboy website says that there will “never be a cover as of the beginning of the year.” We can infer only that waving door charges is an effort to increase attendance and keep the bar open.

One thing is certain: 3 Legged Cowboy is open on New Year’s Eve. Facebook invites promise champagne, food, a raffle, a balloon drop and other seasonal surprises.