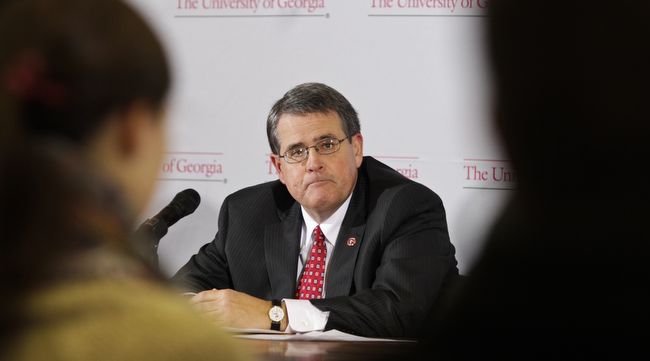 Looks like it might be “strike four” for gay UGA employees looking for full domestic partner benefits. And the people who can make it happen are all pointing fingers at each other.

Newly appointed UGA President Jere Morehead (photo) began his reign last week with a “Hey y'all, how ya doing?” and “Oh yeah, that domestic benefit thing ain't happening.” And who did he punt it to? The conservative, politically appointed Board of Regents, where the proposal has died a quick death three previous times.

"This is the first time that the university has been in a position to offer voluntary benefits. And the chancellor approved that proposal, because we’re not using any state dollars.

“The individuals that take advantage of the voluntary benefits – that’s being paid entirely by employees, through their own voluntary contributions.

“But candidly, with the restrictions that the state has on its health insurance plans, I think we’ve gone about as far as we can go on that issue here at the University of Georgia. I don’t see a path readily available for the institution to pursue that matter here….

This latest proposal was born last September, when UGA 's University Council (made of faculty and student representatives) attempted an end-around the Board of Regents by approving a proposal that would not require state funds, and instead put it in then-University President Michael Adams hands, who could put the benefits in place with money from grants, outside research funds and discretionary money from UGA foundations. (He did OK some pay-yourself-if-you-want-them soft benefits for domestic partners.)

Adams later sent a letter to the chancellor and Board of Regents saying he was on board with DP benefits and he had the authority to start the benefits without their approval, buuuuuut there was the tiny matter of needing $270,000 in order to do it since state funds wouldn't be used. Adams wanted the benefits in place by the end of the 2013 fiscal year on June 30, coincidentally when he would be stepping down. Chancellor Hank Huckaby responded by suggesting UGA work with its foundation to find the money, and that to comply with current law, it would need to be 100 percent privately funded.

But, the UGA Foundation spoke up in June saying “no way you gays," DP benefits aren't consistent with their mission, and that they're not fully private since they're supported by state employees whose benefits are administered by UGA.

Supporters remained hopeful, pointing out that even UGA rival the University of Florida offers full DP benefits even they though they are a public university in a state that bans same-sex marriage. Ouch.

Now, GLOBES, UGA's gay faculty and staff organization, launched an online petition in support of the benefits. On Monday, they were less than 100 supporters shy of their goal of 2,600. So head on over to sign if you want to show your support. Because no one likes an angry, gay Dawg.