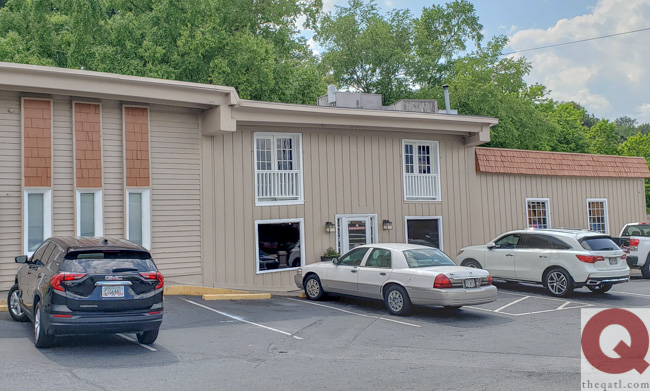 The new owners of the once-popular Burkhart’s Pub picked the bar's new name, set an opening date, and confirmed renovation details and the return of the drag troupe the Armorettes.

The bar’s new name will be Midtown Moon, a nod to the crescent moon hanging on the back wall of the building in the patio area, co-owner Marco Penna told Project Q Atlanta on Tuesday. He said he was told by the bar’s former owners that they bought the piece from the late singer Rick James in 2000. Penna and co-owner Chris McDonald initially considered calling the bar 1492 — the bar’s address on Piedmont Avenue — but that brought with it ties to Christopher Columbus, a connection that wouldn't be helpful for a bar space fighting to move past a controversy over allegations of racism.

Burkhart’s business imploded in January during a controversy over racist social media posts from former owner Palmer Marsh. The bar's entertainers quit, a public forum showed that racism at the venue ran deeper than just its owner, and its general manager was fired. Burkhart's closed its doors in February.

Penna and McDonald announced during the annual Easter Drag Races event that they had closed on a deal to buy the bar, and they've been instituting changes and updates ever since.

Penna said they’re expecting to get their liquor license by May 14, and an invite-only soft opening of the bar will take place on May 22. They’ll host an event for Hotlanta Softball's Big Peach Softball Tournament during Memorial Day Weekend and will have an official grand opening sometime after that.

There were plans to replace one of the first floor bars with a stage for entertainers, but Penna said the city would have required additional liquor licenses, making the change too expensive. Relocating the DJ booth was part of that change, so the booth will remain where it is on the second floor.

There were also plans to replace the pool tables on the second floor with a piano and bistro tables, but that’s on hold.

“We’re going to keep the pool tables for about three or four months,” Penna said. “Chris and I will look at removal of the tables then discuss the piano and bistro tables.”

The new owners are expanding dining options as well, with plans to be open Saturdays for lunch and adding a Sunday brunch. Penna said they’re talking about opening the bar for lunch during the week as well, but they want to get the place up and running “for a couple months” before starting that.

The Armorettes, who were honored over the weekend with the Leon Allen & Winston Johnson Community Leadership Award at the HRC Atlanta Gala Dinner & Auction, were one of the drag troupes who left the bar in the wake of the racism controversy.

“The Armorettes and some former drag shows from the prior ownership are returning,” Penna said, adding that details on the other shows are still being worked out.

They decamped across the Ansley Square parking lot to Oscar’s (also owned by McDonald and Penna) after that, but will be making a long-awaited return to their former home.

“We are really excited to go back to our home bar,” said Mark Blackmon, better known in the Armorettes drag persona Autumn Skyy. “We’re looking forward to seeing all of our fans and celebrating our new home.”

Blackmon said he didn’t know when the troupe’s first performance will be, but that they’ll be performing weekly on Sunday nights.

“My excitement about this is the community,” Penna said. “I want to do more charity events. I want to open up the is bar to do more for our community. That’s what we’re here for. When the community’s involved in our projects, it becomes a much happier place.”