New music from Robbie Williams and the Killers 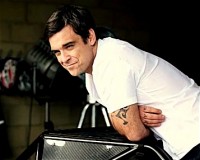 Everyone and their brother is releasing an album between now and the end of the year, so get ready for a slew of new music. These two Nov. 10 releases caught our ear and are sure to have you singing a different tune.

Some fans may feel Robbie Williams (top photos) lost his way a bit on his recent albums, so for them, “Reality” signals a return of the singer/songwriter that charmed us with catchy turns of phrase and a penchant for a solidly-written pop song. 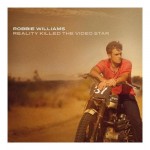 Williams always brings more to the table than the hunk factor, and this release is rightfully being called a comeback in some circles. We knew he never left.

Lead single “Bodies” is a great taste of what’s in store from the whole album: witty lyrics, smooth production, and aplomb aplenty. “You Know Me” is a plucky little ditty with doo-wop flare as well as sweeping orchestration, and “Won’t Do That” is a midtempo number with equal parts rock anthem and pop hooks.

Some of the slick production from “Rudebox” is present on “Reality,” but in a more refined, accessible, and quite frankly, successful incarnation. “Do You Mind?,” “Last Days of Disco,” “Starstruck,” and “Difficult for Weirdos” sparkle and glimmer with modern production behind solid—and sometimes even humorous—lyrics.

Williams doesn’t neglect his ballad mastery, either. “Morning Sun” and “Somewhere” are classic Williams style, while “Blasphemy” easily ranks among the best songs he ever recorded.

Kudos to Williams for producing his strongest album in years, one that may take its place alongside “Escapology” and “Swing When You’re Winning” as the best albums of his career.

The Killers
“Live at the Royal Albert Hall” CD/DVD

In their first live release—which is available on DVD and Blu-ray—the Killers (bottom photos) picked one of the best concert venues in the world and packed it full of fans for two shows during their last tour.

Killers fans are already climbing over each other to get these live renditions of some of the band’s most popular work.

The concert on the DVD runs for more than two hours and spans 22 songs from their collection, including hits like “Human,” “Somebody Told Me,” “Mr. Brightside,” “Read My Mind,” “Spaceman,” and “When You Were Young.”

The CD is produced by former Madonna go-to guy Stuart Price and contains 17 tracks from the DVD concert. This new release provides yet another reason to look at the Killers and say, “Nice package!”